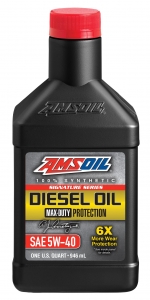 Our answer: Yes, you can certainly use 5W-40 in winter (and summer) in your Duramax. While 15W-40 is suggested as the predominant viscosity for your engine, GM does recommend 5W-40 for temps below -18°C (0°F). AMSOIL’s official stance is that their 5W-40 synthetic diesel oils are safe and perfectly suited for year-round use under all conditions and loads. Naturally, 5W-40 is highly recommended for winter use, but there is absolutely no downside to using it in summer as well.

No. Remember that both 5W-40 and 15W-40 have a 40-weight viscosity. Note that both are offering roughly the same viscosity protection at operating temperature.

The main advantage that 5W-40 offers is faster oil flow during cold-starts.

It is true that 15W-40 has been the predominant diesel oil viscosity for decades. The reason that 15W-40 was a mainstay was its relatively slim spread between the winter weight (15W) and the operating temperature weight (“40”). With previous generations of motor oil technology, a wider spread between winter weight and operating weight (such as 5W-40) was more prone to shearing and thinning.

Today’s motor oils (especially synthetic oils) have a much more linear viscosity across the temperature spectrum. As a result, they are much less prone to being too thick in the extreme cold or thinning out in extreme heat. Therefore, a good 5W-40 will provide flawless protection all year-round.

What Is The Difference Between AMSOIL Signature Series Max-Duty and Heavy-Duty Diesel Oils?

Signature Series Max-Duty is overbuilt for extended oil change interval capability. Heavy-Duty Series should be changed at the interval suggested by the manufacturer or by the oil life monitor.

Heavy Duty Series has a lower price tag. It was brought to market for commercial fleets, the installer market and value-minded consumers.

We can sell AMSOIL Signature Series Max-Duty and Heavy-Duty Series 5W-40 in Canada and the United States. Contact us using the form on this page for a wholesale price list.