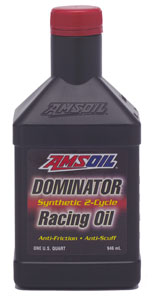 A reader asks: I’ve heard that AMSOIL Dominator 2-Stroke Oil can cause internal engine rust. Is there any truth to this?

Answer: This 100% not true. We have also seen internet chatter suggesting that Dominator Synthetic 2-Stroke Racing Oil causes rust on engine internals like cranks, piston and cylinder walls or at least leaves these parts vulnerable to rust.

AMSOIL Dominator contains hearty anti-rust/corrosion additives, so AMSOIL did their part to protect engines. There absolutely no aspect of the Dominator 2-Cycle formula that can promote rust formation. But can rust still develop, even when using a good two-stroke oil? Yes!

What Is A Major Cause of Internal Rust in Stored Engines?

The main culprit behind rust formation in engine internals is the alcohol content in gasoline and some racing gas. If someone’s engine has internal rust using Dominator, you can bet that the fuel used is either pump gasoline with ethanol (ethyl alcohol) content or racing fuel with methanol (methyl alcohol) or ethanol.

Alcohol fervently absorbs atmospheric moisture through vents and fuel tanks and gas cans. This moisture makes its way into the engine and during storage can cause destructive engine part rust.

Bottom Line: Any two or four-stroke engine can be prone to internal engine rust if a fuel with alcohol content is used prior to long-term inactivity. That can even include engines using quality two-stroke oils that contain an anti-rust protection.

How Can Internal Engine Rust Be Prevented?

Ethanol should be avoided for all small engines and high performance (or racing) two-stroke and four-stroke engines. It gathers moisture which can cause rust during storage. Ethanol can also combine with moisture to cause seizure during operation. If you are using a race fuel with methanol or other alcohol content, definitely consider the next two points.

2. Fog the engine prior to storage (important!).

Remove that air cleaner and start the engine. Spray engine fogging oil into the intake until the exhaust starts to get smoky. Immediately shut down the engine. Remove the spark plug(s) and spray engine fog into the cylinder(s). Crank over engine to distribute fog oil. This process will go long way toward preventing corrosion inside the engine.

Some gasoline additives (like the AMSOIL Quickshot that we offer) dissipate moisture so that it can’t be assimilated into alcohol portion of the fuel. Therefore any moisture that does get into the fuel will not collect into significant amounts. Quickshot has detergents that clean up any moisture-related issues and also provides medium-term fuel stabilization.

Keep A Spray Bottle In Your Car For Clean Headlights Slideshow: New Victory Motorcycles for 2015
Scroll to top