It’s no secret the Harley-Davidson owners are a loyal bunch. So it’s no surprise that some are hesitant to use anything other the house brand of Harley-Davidson Screamin’ Eagle or H-D 360 motorcycle oils. But we have been witnessing a quiet revolution in this area over the past decade. Large numbers of riders are moving to AMSOIL V-Twin 20W-50 or V-Twin SAE 60 Synthetic Motorcycle Oils for their rides. They are raving about the discernible benefits of cooler operation, smoother shifting and reduced oil consumption.

How Does Harley-Davidson Oil Compare To AMSOIL Synthetic 20W-50 and SAE 60?

AMSOIL has conducted several head-to-head tests against Harley oils over the past few years. The comparisons show that AMSOIL delivers superior motorcycle oil.

AMSOIL has tested V-Twin 20W-50 against Harley Davidson Screamin’-Eagle Syn3 in a viscosity breakdown test. The results weren’t even close. “CEC L45-A-99” (also known as “KRL Roller Bearing Test”) is considered to be the most accurate test of an oil’s ability to maintain viscosity during intense load.

After the 20-hour test, Harley-Davidson Screamin’-Eagle Syn3 20W-50 lost a whopping 25% of its original viscosity. AMSOIL V-Twin 20W-50 lost a mere 4% of its viscosity. Which oil would you trust in your engine, transmission and primary? 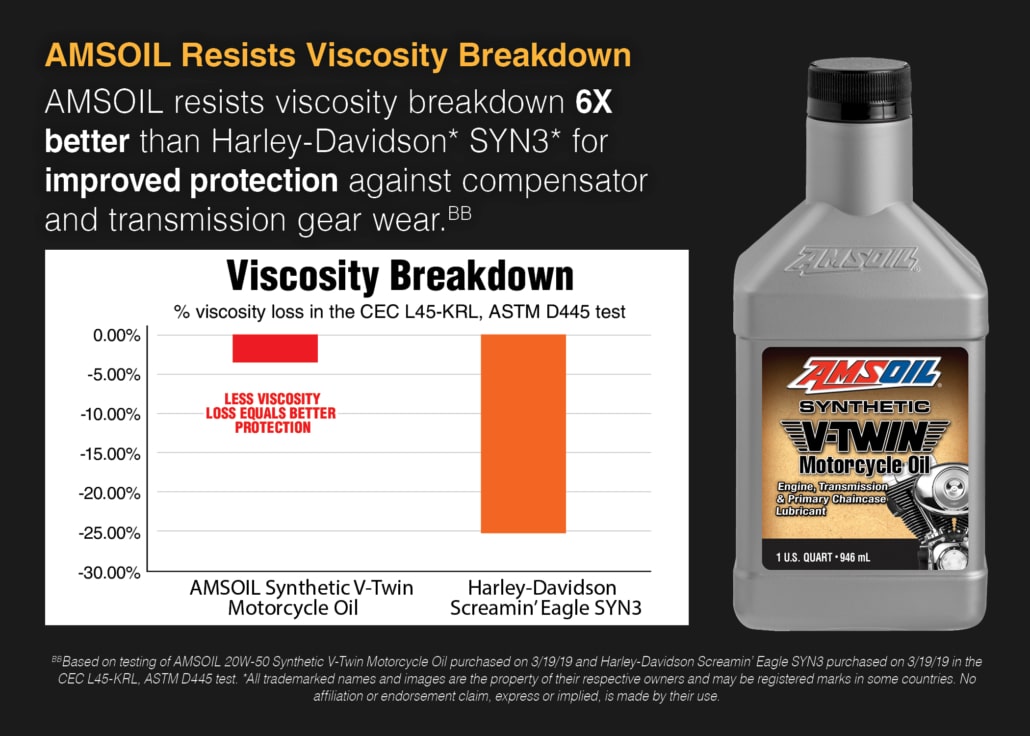 Below is a chart comparing AMSOIL SAE 60 and Harley-Davidson HD-360 SAE 60 motorcycle oils. The ASTM D 4683 test procedure demonstrates an oil’s ability to maintain viscosity protection under high temperatures. As you’ll note in the graph below, the AMSOIL SAE 60 Motorcycle Oil’s viscosity is 11.26% higher than the HD-360 SAE 60 Motorcycle Oil. This means that the Harley SAE 60 oil was more susceptible to shear-down. AMSOIL SAE 60’s viscosity was steadier. Therefore, this translates into stable and consistent protection under extreme heat and loads.

Which AMSOIL Product For My Harley?