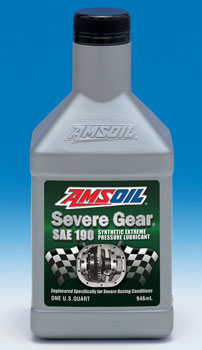 High banked corners or fast circle tracks can cause gear oil to gravitate to one side of a differential for extended periods. This can leave one side of the differential completely dry of oil for as long as extreme g-forces are present. Severe Gear Synthetic SAE 190’s ultra-high film strength and stout viscosity always keeps a healthy film of oil in place to protect all differential parts in the face of high g-forces.

During extended periods of heavy loads and extreme heat, some gear oils can shear down and lose their viscosity protection. AMSOIL Severe Gear Synthetic SAE 190 Gear Lube uses a shear resistant synthetic base oil that maintains its viscosity during the longest event and over long service intervals.

Many racing and high performance vehicles are stored for much of the year. During these extended down times, internal rust and corrosion can take hold. Severe Gear SAE 190 is reinforced with an additive package that keeps corrosion at bay until its time to hit the track again.

Severe Gear SAE 190 is suitable for any racing or high-performance application requiring a high viscosity gear oil with the API GL-5 specification. Suitable applications include:

The use of any aftermarket oil additives (other than limited-slip friction modifiers) is definitely NOT recommended.

Change Severe Gear SAE 190 at regular service intervals or as prescribed by the differential builder. Change more often when differential is immersed in water for extended periods.