The mandated emissions equipment in 2007 and newer on-highway diesels are especially harsh on engine oils. The main new changes were higher EGR (exhaust gas recirculation) rates and the addition of diesel exhaust particulate filters (DPF). The EGR system redirects some of the exhaust gases normally emitted through the exhaust pipe back into the engine. The increased rates will generate more soot and acids as well as increasing operating temperatures.

As miles have been logged on the new generation of diesels, an even bigger issue has materialized. As the exhaust particulate filters fill with soot, manufacturers have a system in place to clean them out. Ford, GM and Dodge use an “active regeneration” system which sends raw fuel down the exhaust stream on the exhaust stroke which burns the soot out of the particulate filter. Unfortunately, this has lead to excessive fuel dilution in the engine oil of 2007-2010 light-duty diesel pickups from Ford, GM and Dodge. This issue has prompted AMSOIL to dial back the drain intervals on their Premium API CJ-4 5W-40 & 15W-40 Synthetic Diesel Oils to the manufacturer-recommended drain interval in these models. This situation is explained in detail in the technical service bulletin: Fuel Dilution Issues in 2007-10 Light-Duty Diesel Trucks. On-highway Caterpillar C13 and C15 engines have their own unique fuel dilution issues as discussed in the bulletin: Fuel Dilution in 2007 and Newer Cat C-13 and C-15 Engines.

Combining fuel dilution with shearing, tests the mettle of even the best diesel engine oils. With this in mind, AMSOIL sent five competing brands of API CJ-4 5W-40 diesel engine oils (including their “DEO” AMSOIL Premium API CJ-4 5W-40 Synthetic Diesel Oil) to an independent laboratory for shear stability testing. For good measure, they doubled the standard Kurt Orbahn 90 cycle test (ASTM D-6278) to 180 cycles. Samples were then tested with 2% ultra low sulfur diesel fuel content and then with 4% fuel content. As the graph below shows, even with 4% fuel dilution and shear testing at double the ASTM testing standard, AMSOIL “DEO” was the only product that maintained the SAE 40 viscosity grade. Mobil Delvac 1 ESP, Shell Rotella T, Chevron Delo 400T and Valvoline Premium Blue Extreme all sheared down into the SAE 30 grade. 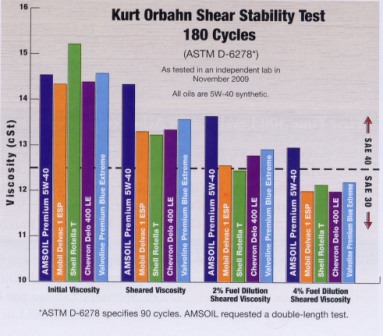