Communicate the discovery and cause of excessive fuel dilution in 2007-2010 light-duty diesel pickups from Ford, GM and Dodge and the resultant reduction in the drain interval recommendation for AMSOIL Premium Diesel Oils in these applications.

AMSOIL has documented increasing levels of diesel fuel contamination (fuel dilution) in the engine oil in 2007-2008 light-duty diesel pickups from all major vehicle manufacturers, and indications are that 2009 – 2010 models are affected as well.

Research indicates that fuel dilution is intensifying due to the use of in-cylinder post-fuel injection during the engine’s exhaust stroke to regenerate the diesel particulate filter (DPF).

Fuel in the oil reduces the oil’s life expectancy and effectiveness. Because diesel fuel is a natural solvent, fuel dilution in motor oil causes a decrease in viscosity which may lead to an increase in engine wear rates.

Current emissions legislation set by the Environmental Protection Agency (EPA) mandates that all 2007 and newer on-highway diesel-fuelled vehicles come equipped with a DPF. A DPF is generally a honeycomb-like filter positioned in the exhaust stream to collect particulate matter and soot to prevent it from exiting the vehicle. DPFs are highly efficient and can usually remove 80-90 percent of particulate matter from diesel exhaust.1 When the filter is near its capacity, soot trapped in the filter is burned, freeing the plugged media and enabling the filter to remain serviceable. The process of burning the residual matter is termed regeneration and can be either active or passive.

All class 8 over-the-road tractors and medium-class applications use active regeneration via in-stream injection. In this method, diesel fuel used to burn soot in the DPF is injected directly ahead of the DPF and does not reach the crankcase, leaving the oil uncontaminated.

Light-duty diesel pickup manufacturers (Dodge, Ford, GM) have opted for a less-costly in-cylinder injection system. With in-cylinder injection systems, raw diesel fuel injected on the exhaust stroke can wash directly past the rings and into the crankcase, mixing with the oil. Regular washing of cylinders is a continuous source of fuel contamination in the crankcase and is not conducive to long-term engine protection. Used oil analysis results from 2007-2010 light-duty diesel vehicles showed some elevated fuel dilution, but at tolerable levels.

Like DPFs, NOx adsorbers need to be regenerated. However, they require significantly more fuel to regenerate than DPFs do, which only compounds the fuel dilution problem. In Dodge light-duty turbo-diesel pickups, the combined regeneration requirements of the DPF and NOx adsorber technologies are causing high fuel dilution of the engine oil. 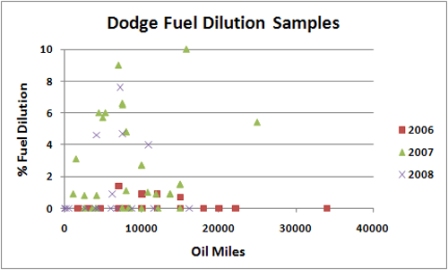 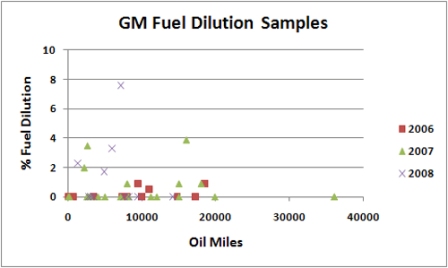 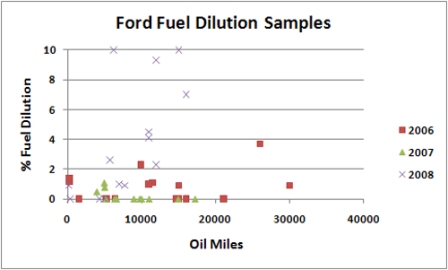 As illustrated in the charts, model-year 2007 and newer light-duty diesels are experiencing higher fuel dilution than previous model years. Although these vehicles are experiencing higher fuel dilution, regeneration cycles vary based on service (engines operating in severe service conditions do not actively regenerate as often as engines operating in normal service conditions), and some applications are affected more than others. While not all 2007-2010 light-duty diesel vehicles develop this problem, fuel contamination can reduce oil viscosity and decrease film thickness. Other concerns include significantly reduced fuel economy, accelerated engine oil oxidation, increased volatility and overfilling of the oil sump.

Owners of affected vehicles should use oil analysis to determine the severity of fuel dilution in their vehicle. If fuel dilution levels are above 5 percent, contact the dealership or OEM for help finding a solution. AMSOIL and OIL ANALYZERS condemn oils with greater than 5 percent fuel dilution.

While AMSOIL does not have extensive documentation of fuel dilution trends for 2009-2010 models, it is safe to assume fuel dilution will remain an issue because these models employ the same DPF regeneration technology as 2007 – 2008 models.

Pre-2007 diesel applications not equipped with emission system devices are not affected by these changes. Those applications can still extend oil drain intervals to 3X vehicle manufacturer recommendation, not to exceed 50,000 miles/600 hours or one year.