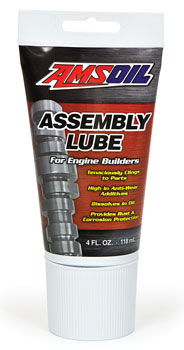 Adheres to Engine Parts in New or Rebuilt Engines

Not for Two-Stroke Engine-Building Use

What are the Main Tasks of a Good Engine Assembly Lube?

AMSOIL Engine Assembly Lube is designed to avoid three potential concerns related to the building of street rod, classic car or racing/performance engines. These concerns would be:

Adheres To Engine Parts for as Long as it Takes

A Barrier Against Moisture, Rust/Corrosion

As engine rebuilding projects can remain in your shop in various states of completion for weeks, months or even years, internal rust and moisture damage on engine parts is a valid concern. This engine assembly lube offers a robust anti-rust/corrosion component that protects engine parts for as long as it takes to complete your project engine.

Liquefies Once Exposed to Oil Pressure

Some engine assembly lubes can block oil passages or form deposits when exposed to heat. A good assembly lube disappears once it has done its job. AMSOIL Engine Assembly Lube liquefies and assimilates into the engine oil once normal oil pressure occurs for a few moments. This eliminates the chance of blocked oil passages or the possibility of the lube creating deposits.

Suitable for the assembly of any automotive, four-stroke engine including: