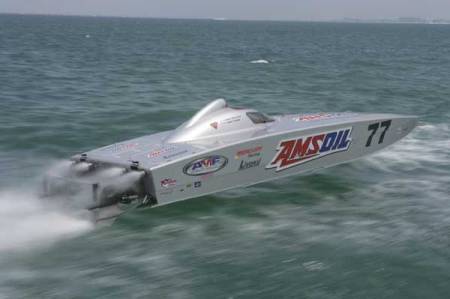 The AMSOIL Offshore Racing Team recently saw firsthand how AMSOIL lubricants deliver excellent engine protection under extreme conditions. The team’s Skater 368 boat, owned by Bob Teague (throttleman) and Paul Whittier (driver), runs a pair of Mercury 525 EFI V-8 engines, and has propelled the team to many national and world championship titles in several different categories of racing. In 2009, the #77 Skater 368 logged over 3,000 miles of racing and testing. Since they were new, the Mercury 525s have run nothing but AMSOIL Dominator 15W-50 Synthetic Racing Oil, the exact same oil available to all AMSOIL customers. 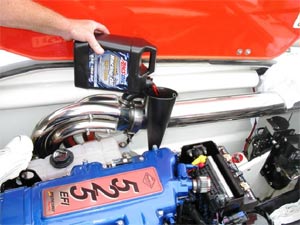 “They had never seen a pair of racing engines in such good condition after a full season of racing,” said Cherilyn Teague of Team AMSOIL. “It was reported that wear was minimal to non-existent and that the engines were extremely clean internally.” 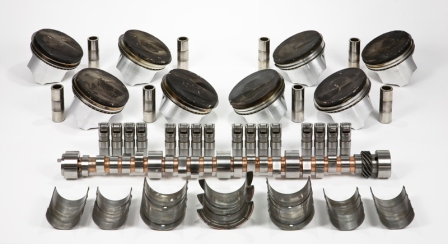 Close-up of main bearings. Notice absence of wear despite over 3,000 miles of use in racing applications.

Camshaft shows no signs of wear or bluing.

In recent years questions have arisen over the suitability of full synthetic oils used in marine engines with hydraulic roller lifters – engines like the Mercury 525s used by Team AMSOIL. The findings of Mercury’s technicians go a long way toward answering those questions. Team AMSOIL ran the entire 2009 season with no engine repairs. The only maintenance performed was changing the oil, oil filters and fuel filters.

“Inspection of these engines after a year of full throttle operation further validates AMSOIL Dominator Synthetic Racing Oil as the only choice for performance marine engines,” Teague said. Whether AMSOIL users are blowing leaves in the back yard or blowing away the competition on the water, they can be sure that AMSOIL delivers excellent protection across a wide range of applications.