Congratulations to Marcel Irnie of Kelowna, BC who made the best of his sole appearance in the Canadian Superbike Championship series over the weekend. Irnie has been participating (with great success) in a number of race series’ in the US this season. His one foray into the Canadian scene was this past weekend at Canadian Tire Motorsport Park near Bowmanville, Ontario. Against Canada’s elite professional racers in the Pro Superbike class, Irnie score a third place finish on Saturday and a second place finish on Sunday. Both races were intense with very close finishes. 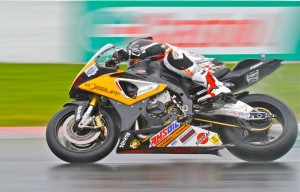 Marcel Irnie pilots his mymobibuff.com BMW in the rain to 3rd place in round 4 of the CSBK Series. (Photo courtesy of John R. Walker of www.oneword.ca)

Irnie has been able to reach his full potential this season due to his support deal with mymobibuff.com and his success in the Canadian series over the weekend was yet another case in point. Marcel competes in the AMA Pro stop in Millville, New Jersey next month. AMA Pro is America’s top professional race series.

Marcel came out of nowhere in the latter part of the 2000’s to become one of Canada’s top amateur racers. He had natural talent that made him an instant sensation on the amateur scene, but the road to professional success has been a rocky one. He got his break in 2014 and hasn’t looked back. Irnie has been competitive in virtually every pro race this season and has carved out a reputation as one of North America’s most dynamic motorcycle racers.

Here are the CSBK-produced telecasts from the weekend. Irnie’s on-board video footage play a prominent role.