If you own a Ski-Doo snowmobile equipped with the latest E-TEC engine, you may be under the impression that only BRP XPS-2 Synthetic 2-Cycle Oil is capable of protecting your engine. You wouldn’t be alone as Ski-Doo and their dealer network work very hard to promote this sentiment. AMSOIL has often contested OEM claims that they should have a monopoly on oil sales for their equipment. In the case of Ski-Doo E-TEC engines, AMSOIL performed extensive testing to prove that their Interceptor Synthetic 2-Stroke Oil is up to the task.

What is Different About “E-TEC”? 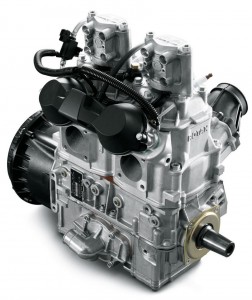 The Ski-Doo/Rotax E-TEC concept is probably the most sophisticated production 2-stroke engine on the market. It offers plenty of real-world benefits including lower oil and fuel consumption, low emissions, precise power delivery and light weight. E-TEC uses direct fuel injection (“DFI”), meaning that fuel is injected directly into the cylinder under very high pressure. Engine control electronics process about 8000 calculations per second, making sure that the engine is receiving the correct amount of fuel and oil as conditions dictate. This makes for ultra-low emissions and industry-leading fuel economy. BRP also claims that these engines consume about half of the 2-stroke oil as compared to their previous engines. In fact, they claim that the oil tank may need to be filled once in a typical 2000 kilometer season. Not only are these engines efficient and clean, they perform. The E-TEC 800R engine delivers a whopping 163.9 horsepower.

That amount of horsepower in a tiny package makes for high heat and stressful operation. Coupling this with minimal oil consumption, means that E-TEC owners can’t just grab the cheapest 2-stroke oil at the gas station and hit the trail. There is no disputing that E-TEC engines need an oil with supreme cleaning and lubricating properties.

Is Only XPS-2 Synthetic 2-Cycle Oil Up to the Task?

As AMSOIL didn’t think so, they performed some extensive tests using industry recognized methods. They have released two papers on the subject.

In the AMSOIL Interceptor, Ski-Doo/BRP XPS-2 Comparison Testing Study (1.2 MB PDF), AMSOIL pits their Interceptor Synthetic 2-Stroke Oil against BRP XPS-2 Synthetic 2-Cycle Oil. As you’ll see, Interceptor exceeds the performance requirements of E-TEC engines and handles (the more expensive) XPS-2 quite nicely in all of the testing. Take special note that some of the test values are on a 1-10 scale while others are derived from a “percentage of an area with defects”.

The other paper is the Case Study of AMSOIL Interceptor in Ski-Doo E-TEC Engines (955k PDF). In this field trial, an 800R E-TEC engine is torn down and inspected after 3469 miles of hard trail riding using Interceptor. Again, the results showed that Interceptor provided outstanding protection in the E-TEC engine.

As you’ll see in the testing, Interceptor comfortably exceeds the performance requirements for E-TEC engines. While the XPS oil is no slouch, pound-for-pound and dollar-for-dollar, AMSOIL Interceptor is a logical choice for E-TEC owners. The E-TEC engine is an absolute gem and we believe that this engine and other clean DFI concepts may keep the 2-stroke engine on the trails for many years to come. We are fully confident that AMSOIL Interceptor Synthetic 2-Stroke Oil can deliver the ultimate in protection and performance and this is backed by AMSOIL’s Limited Warranty.