A reader asks: I have a question regarding 2-stroke outboard engine oil for racing. My engine is a modified, high-compression, 40-horsepower Yamaha. This motor is used only for drag racing. During races, it runs up to 8000 rpm.

Would AMSOIL Dominator 2-Stroke Racing Oil work well? Or would AMSOIL Interceptor be a better option for this engine? 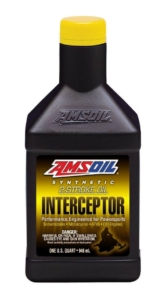 Our answer: First, let us preface our answer by mentioning that the following oil recommendations apply to racing situations only. Stock outboard engines would require a different oil. This is important and we’ll touch on that below. Both Dominator and Interceptor will provide superb wear protection for your racing outboard. But because of the racing/marine operating conditions, we would lean toward Interceptor.

Marine engines are still apt to run cooler and operate at lower rpm than 2-stroke engines used on dry land (even in this racing application). Think motocross or kart racing engines that run at 12,000-plus rpm. Therefore, your racing outboard engine will still be prone to engine deposits.

Interceptor contains a large amount of detergents. The motivation for the high detergent content is to keep snowmobile power valves clean. So, you would see cleaner engine internals with Interceptor over Dominator.

Dominator is a “racing-only” 2-stroke formula. It was designed for dry land racing engines that are torn-down frequently. Dominator should be used only in modified engines that run at extremely hot operating temperatures. Therefore, less detergents are required.

Interceptor will deliver all of the wear control needed. Plus it will ward off deposits and prevent plug fouling.

For marine engines in stock trim, do not use Interceptor or Dominator. For normal marine conditions, depositing and plug-fouling could be the result.

What About Oil For Outboard Engines Under Normal Use?

A reader asks: I just bought a 2011 Yamaha Apex LTX snowmobile with the 998cc 4-stroke engine. The manual suggests using a 0W-30 motor oil meeting API SG (or higher) and JASO MA. All I can find locally is a NAPA Synthetic 5W-30. This is basically a car engine oil. Is it OK to use a car oil in a snowmobile engine?

Our answer: No, a car motor oil is not suitable for your Yamaha snowmobile. While an automotive oil like this may work in a pinch, it’s not the best option for regular snowmobile engine duty. It would be very wise to use a motor oil that is formulated for power sports use. Here are the reasons.

There is a belief by some that Yamaha forbids the use of friction modifers in the motor oil for their snowmobile engines. We didn’t think so, but learned otherwise the day after this post was first published. Most Yamaha snowmobile engines do actually employ a wet-clutch in the starter system. The friction modifiers in automotive motor can cause slippage and wear on the starter clutch. So using the Mobil 1 meant for your truck is not good for your Yamaha snowmobile!

There is another good reason that JASO MA might be suggested. This being that a power sports-specific motor oil will have higher levels of zinc and phosphorus than a modern automotive motor oil. Zinc and phosphorus are important anti-wear additives. Therefore, suggesting a JASO MA oil will ensure that the consumer uses a motor oil that offers sufficiently robust anti-wear properties.

Our best all-round option for 4-stroke snowmobiles is AMSOIL Formula 4-Stroke Power Sports Synthetic 0W-40. Why a 0W-40? Yamaha themselves suggest synthetic 0W-40 as an option for most all their 4-stroke models.

Here are the features that make AMSOIL Formula 4-Stroke 0W-40 such a strong option for Yamaha snowmobiles.

Questions? Feel free to contact us using the form on this page.

A readers asks: I’ve got a 2009 Yamaha 20MLHH 2-stroke, 20 horsepower outboard engine. Yamaha recommends a 100:1 mix ratio. I see that AMSOIL HP Marine has a recommended premix ratio of 50:1. I feel that this ratio is too rich for this engine. Is there any way I can get the 100:1 AMSOIL Saber Outboard Oil in Canada?

Our answer: Your Yamaha outboard engine can easily use AMSOIL HP Marine at 100:1. It can replace the OEM Yamalube 2M TC-W3 2-stroke oil (with less exhaust smoke). It is true that Saber Outboard Premix Oil is no longer offered in Canada. However, HP Marine is certainly not a downgrade for your engine.

While HP Marine has a suggested mix ratio of 50:1 on the label, it is no stranger to ultra-lean mix ratios. HP Marine has been heavily tested in Evinrude E-TEC engines at the “lean-mix” setting. This is the equivalent of an approximate 100:1 ratio. AMSOIL’s extensive testing under extreme loads at this lean-mix setting proves that it delivers outstanding wear protection.

Yamalube 2M TC-W3 2-stroke oil is only a partial-synthetic product. HP Marine is a 100% synthetic formula that offers the very latest two-stroke marine oil technology. Therefore, we would rate it as a considerable step up over the Yamalube product.

For US customers that have access to Saber Outboard, it is also an excellent choice for Yamaha outboards requiring a 100:1 premix ratio.

AMSOIL has released a brand new synthetic 15W-50 motorcycle oil for sport and adventure bikes. The new AMSOIL 15W-50 Metric Synthetic Motorcycle Oil is ideal for a wide variety of motorcycles from BMW, Ducati, Yamaha, KTM, Triumph and Royal Enfield. This product is ideal for European and Japanese motorcycles requiring a 15W-50 for engine and transmission service. Metric 15W-50 delivers all of the benefits of AMSOIL motorcycle oil technology that has been proven over millions of miles.

Why Did AMSOIL Make A 15W-50 Motorcycle Oil?

While 15W-50 is a relatively uncommon motorcycle oil viscosity, AMSOIL did not want any holes in their lineup. Here are some of examples of motorcycles that take 15W-50 oil.

Where Can I Buy AMSOIL 15W-50 Metric Synthetic Motorcycle Oil?

Oildepot can sell Metric 15W-50 Motorcycle Oil in the USA or Canada. We’ve got an assortment of wholesale options that can allow you to buy at the best prices. Contact us for pricing using the form on this page and put “Metric 15W-50″ in the questions or comments section.

Why Should I Use AMSOIL 15W-50 Metric Synthetic Motorcycle Oil?

As we close out our preview series of 2015 snowmobiles, we feature the latest offerings from Yamaha. We will also offer specific synthetic oil recommendations for their snowmobiles at the end of this article.

Yamaha is the only big four sled maker with a non-North American parent company and their snowmobile heritage is a proud one. Yamaha was primarily a musical instrument maker until they decided to branch out into the motorcycle market in the mid-1950’s. The triumphs of that venture lead to a foray into the snowmobile market in 1968 and Yamaha hasn’t looked back since. A watershed moment occurred in 2003 when Yamaha introduced the RX-1. This 1000cc machine was the first serious four-stroke snowmobile and its influence has changed the market forever. By 2005, Yamaha had all but phased out the 2-stroke engine, save for a few marginal models. Switching to four-stoke engines was a gutsy move ten years ago and they certainly had their detractors, but as you’ll see, their 2015 line is competitive and will generate strong sales.

Starting last year, Arctic Cat and Yamaha have been involved in a component-sharing romance that had Yamaha using some Arctic Cat chassis’s and Arctic Cat using Yamaha four-stroke engines in some models. This relationship continues in 2015 with Yamaha using Cat platforms on their SR Viper trail, crossover and mountain line-up.

Where Are Yamaha Snowmobiles Built?

Any Yamaha with the “SRV” chassis (Viper series) is actually assembled by Arctic Cat at their Thief River Falls, Minnesota factory. The remainder of the Yamaha line including Apex, Phazer, Venture, Vector and Viking are all still made in Japan.

Yamaha fans with an affinity for mountain riding have reason to cheer in 2015. The new SR Viper M-TX mountain sled uses Arctic Cat’s “M” chassis with Yamaha’s renowned 4-stroke Genesis engine. The Genesis engine is 3-cylinder, 1049cc engine that puts out about 135 horsepower. This unit will be available with a 153” or 162” track with 2.6” lugs. Although the SR Viper M-TX would be very similar to an Arctic Cat M7000 Sno Pro, there are subtle differences. Yamaha added their own flavor to the Cat-made M-TX with special engine mapping and their own clutches, so they do have slightly different operational characteristics. The Yamaha Mountain versions also have slightly taller and plusher suspension.

A New Player in the Crossover Division

Yamaha’s now offers a fresh entry in the popular crossover sled category. The SR Viper S-TX DX uses the Arctic Cat XF Crossover platform with Yamaha’s Genesis engine. The Arctic Cat twin to this machine would be the XF Crossover 7000. Yamaha adds their own clutches, a heated seat, a Fox Float 2 rear shock, a rear rack and trunk bag and dual-keel Tuner skis, so it’s not a 100% Cat-clone.

The remainder of the 2015 Yamaha line receives minor cosmetic changes and revisions.

Yamaha offers their 4-stroke engines in four variations. The flagship Genesis engine comes in 998cc or 1049cc 3-cylinder versions and also a 998cc four-cylinder unit. A twin-cylinder 499cc Sport/Performance engine is offered for their sport sleds. All of these four-stoke engines can use the same type of engine oil. Yamaha offers two motor oils for their four-cycle engines under the Yamalube brand. The high performance option is the Yamalube 0W-40 Full Synthetic Snowmobile Oil with Ester which is marketed toward their high performance sleds. The Yamalube Semi-Syn 0W-30 Synthetic Oil for Snowmobiles is offered for their recreational and utility snowmobiles.

We offer a single four-stroke motor oil that is not only a replacement for the Yamalube snowmobile oils, but a healthy upgrade at a reasonable price. The AMSOIL Formula 4-Stroke Power Sports 0W-40 Synthetic Motor Oil is designed to deliver the uncompromising wear control and friction reduction that you would expect from a 100% full-synthetic oil. It is also quite appropriate for engines equipped with the optional MPI Trail Turbo-Charger Kit. This oil pumps down to -51C (-60F), so your engine receives instant oil pressure at start-up and improved engine cranking. AMSOIL Synthetic 0W-40 contains powerful anti-rust and corrosion agents that protect your engine internals during sledding season and also during the long summer storage period. With our wholesale programs, we can offer this synthetic 0W-40 sled oil at a competitive price for Canadian or US customers.