It’s hard to believe, but Yamaha has been in the snowmobile business for almost a half century. During that time, they have outlasted dozens of competitors and have brought forth numerous innovations that have helped make the sport what it is today. For 2016, Yamaha delivers new models and some significant refinements. Let’s take a look. 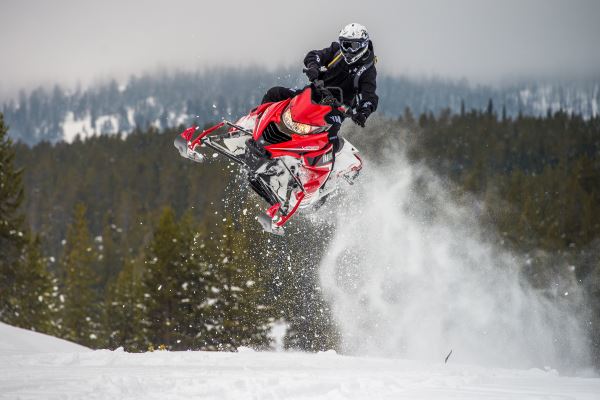 Here are Yamaha’s model groups for 2016.

Arctic Cat designs and produces Yamaha’s SRViper chassis’s and as Cat released a new front end for their M Series sleds this season; Yamaha SRViper M-TX models gain this exciting new set-up as well. The crux of this new front end is a redesigned spindle, a new ski that is exclusively shaped for mountain use and a shortened ski stance. The new spindle has a steeper angle which improves side hill and off-camber work. This spindle also has a much slimmer profile which diminishes drag in heavy powder. The new ski has a 7” width at the tip for improved flotation that tapers to 6.5” through the back. The ski stance has been pared down from 38” to 36”. This new mountain front end is 2.4 pounds lighter than last year’s package.

Yamaha introduces a new 141″ mountain snowmobile for 2016. The new SRViper M-TX 141 SE is set up similarly to the 153 and 162 SE models with the only differences being that its ski stance is 40”, it is equipped with a sway bar and has a 2.25” track. This model is adorned with the same new front spindle, suspension and mountain skis as the rest of the M-TX models.

Yamaha has devised a brand new rear suspension for Apex and Vector models that improves the ride and tractability. Yamaha calls this suspension concept “SingleShot” and it is found on 129” and 146” track models. This suspension mechanism is 10 pounds lighter and has fewer moving parts than the old Monoshock system. The SingleShot suspension employs a Fox Float 3 XV shock .

Another benefit of Yamaha’s alliance with Arctic Cat is a couple of new crossover sleds designed for the high performance/adventure-touring segment. The Yamaha SRViper S-TX 146 DX is very similar to the Arctic Cat XF 7000 CrossTour, while the Yamaha SRViper S-TX 137 DX is comparable to the Arctic Cat XF 7000 CrossTrek. These Yamaha S-TX DX models are made for all-day exploring with big fuel capacity, heated seat, 11” windshield, extra storage and a new dual shock rear suspension.

Engine Upgrade for Venture and Vector

Yamaha offers a revamped, mid-performance version of the 1049cc Genesis engine for Venture and Vector models for 2016. Not only does this engine have a cache of new engine internals like cranks, pistons and castings, it also has some electric aids which will optimize performance and fuel economy. Yamaha Chip Controlled Throttle (or YCCT) is a “drive by wire” system that delivers the precise fuel/air mixture on a constant basis. Also part of this package is the new “D-Mode” system which allows the rider to change the engine’s performance mode with a button on the dash. The rider can select between an “Entry Mode” for new riders, a “Touring Mode” for optimum low- and mid-range performance and a “Sport Mode” for maximum output.

While the 2016 Yamaha VK Professional II rides on the same chassis as last year’s RS Viking Professional, the upgrades for this season make it considerable step up. The biggest upgrade is the move from last year’s carbureted 973cc engine to the fuel-injected Genesis 1049cc engine. This upgrade brings more torque and about 5% better fuel economy. The new VK Pro boasts other improvements like increased fuel capacity, a more comfortable upright riding position and 1.5” lugs on the 154” X 20” track. More power, comfort and tractability makes this utility sled a very attractive candidate for farm, ski hill and industry.

Yamaha owners expect long service life out of their snowmobiles and to further protect their investment, many of them use AMSOIL synthetic oil. Oildepot carries synthetic 4-stroke engine oil, chaincase oil and suspension grease that function flawlessly in Yamaha snowmobiles. Our wholesale prices on these superior lubricants is very competitive versus the Yamalube products found at your Yamaha dealer. Here are the main Yamalube products and the AMSOIL products that can replace them.

Yamalube Chain Case Lube- Yamaha Chain Case Oil is a conventional lubricant and as mineral oils have serious limitations (especially in winter), we can offer a much better substitute. AMSOIL Synthetic Chaincase Oil offers outstanding wear protection and friction reduction for all Yamaha chaincases including those with the HY-VO chain. It withstands extreme shock loads and the stump-pulling torque doled out by the Genesis 1049cc and 998cc engines. It also performs all the way down to -46°C for extreme cold weather performance.

Yamalube High Performance Snowmobile Suspension Grease- We’ve got a full synthetic grease that is ideal for all Yamaha snowmobile suspension, chassis and steering maintenance. AMSOIL Synthetic Water Resistant Grease pumps at low temperatures and resists wash-out from water, snow and ice. This tenacious grease stays put when exposed to heavy loads and the hard hits of very rough terrain. This grease is also suitable for applications where your Yamaha manual suggests ESSO/Mobil 325 Grease.