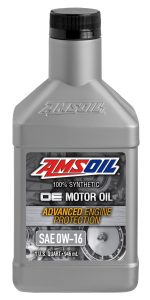 A small motor oil revolution started in 2018 of which few people are aware. The introduction of the brand new 0W-16 motor oil viscosity.

In the case of the Fit, Honda is suggesting either 0W-20 or 0W-16. The 0W-20 viscosity is relatively common, so this was a consumer-friendly choice.

0W-16 is the only recommended viscosity for the latest Camry 2.5L engine. There are two versions of the Toyota 2.5 litre “Dynamic Force Engine”. The A25AFKS conventional engine and the A25AFXS hybrid engine. Toyota is claiming that these two engines are among the most thermally efficient motors on the market. The addition of friction-reducing 0W-16 would certainly optimize this efficiency.

Quite simply to maximize fuel economy. Car makers have been moving toward thinner engines oils and transmission fluids for the last couple of decades. Thinner oils reduce friction and deliver a relatively small fuel mileage boost. Auto makers have to meet corporate average fuel economy (also known as CAFE) targets set by the US government. If they miss these targets, the penalties can run into the tens of millions of dollars. Going with thinner motor oils may deliver just a small fuel economy improvement per car. But every little bit counts as auto makers strive for mileage gains.

Obviously, it’s too early to tell. But we strongly doubt that this will be a problem. Today’s engines are made with very precise tolerances along with high-tech materials and manufacturing processes. Motor oil technology has also kept pace with cutting-edge synthetic base oils and ever-advancing additive chemistry. As soon as wear protection test data becomes available, we will post it. We would not be at all concerned with using this new viscosity where it is recommended.

For now, 0W-16 is suggested for smaller displacement 4-cylinder engines. It will be interesting to see if 0W-16 is soon suggested for turbo-charged, V-6 or even V-8 applications.

Back in the early 2000’s, 5W-20 motor oil was introduced. Honda and Ford were early adopters of this grade with Ford even making 5W-20 the factory fill in their V-8 and V-10 pick-up engines. There were concerns that 5W-20 was too thin to protect engines and that it was simply a fuel economy improvement scheme. Early on, many believed that auto makers were willing to sacrifice engine life in order to meet their government-mandated fuel economy targets. But that concern never became a reality.

Going forward, we fully expect that 0W-16 motor oil will be viewed as an integral part of overall automotive efficiency improvements with no discernible engine wear consequences.