Some may have noticed that AMSOIL has changed their injector oil recommendation for all Sea-Doo personal watercraft models with 2-stroke engines.

Previously, AMSOIL had suggested Interceptor Synthetic 2-Stroke Oil for Sea-Doo 2-strokes. The reason being is that Sea-Doo had traditionally suggested oils meeting the API TC specification. As Interceptor is AMSOIL’s premium API TC 2-stroke oil, it was the default choice for Sea-Doo models.

But a change in thinking prompted AMSOIL to suggest two other choices.

HP Marine is suggested for applications requiring NMMA TC-W3 two-stroke marine oil. Many will argue that TC-W3 oils should be avoided in Sea-Doo applications. But, keep in mind that HP Marine’s elite synthetic formula exceeds the TC-W3 standard by a country mile.

Today’s ashless detergents (as found in HP Marine) and synthetic base oils are worlds better than the formulations from yesteryear. HP Marine is overbuilt in terms of wear protection and RAVE power valve deposit control. The “API TC vs. TC-W3” discussion is obsolete when it comes to some of the elite synthetic two-stroke oils of today.

Is Interceptor Still A Safe Choice for Sea-Doo 2-Stroke Models?

In conclusion, AMSOIL could have stuck with Interceptor as a safe recommendation for Sea-Doo 2-stroke engines. But HP Marine also delivers cutting edge wear and deposit protection for hard-running 2-strokes. The extra boost of anti-corrosion protection and marine low-toxicity was a enough to tip the scales in favor of HP Marine.

A reader asks: I’m looking for oil for my 2003 Sea-Doo GTI 787 with a 2-stroke engine. The previous owner used the BRP XPS 2-Stroke Mineral Oil. I’m afraid to change to a different oil as I do not want to hurt the engine. What do you suggest?

Our answer: Switching to a full synthetic two-stroke oil from a mineral-based oil will not cause any damage or performance issues. In fact, a good full-synthetic 2-stroke oil will dramatically improve wear control and enhance performance. There is zero downside to switching over to synthetic oil and plenty of upside.

Here are some of the benefits that you will notice by switching from a conventional (or “mineral”) 2-stroke oil to synthetic.

The full-synthetic upgrade we offer is AMSOIL Synthetic Injector Oil. It will deliver cleaner operation, less smoke, lower friction, better wear control and improved performance over the XPS Mineral 2-Stroke Oil. All of these features are available at a very competitive price versus BRP XPS Mineral Oil from your Sea-Doo dealer.

A reader asks: I have a 2012 Sea-Doo RXP-X 260 with the 1493cc supercharged/intercooled 4-TEC engine. I know some Sea-Doo owners use Shell Rotella 10W-40 diesel oil and others swear by BRP XPS Semi-Syn Oil? What is the correct AMSOIL engine oil recommendation?

Answer: As you have the supercharged Rotax 4-TEC engine, using the proper motor oil is vital. AMSOIL 10W-40 Marine Synthetic Motor Oil covers all of the bases. It is likely the best choice on the market for your supercharged Rotax.

The first consideration is that the motor oil is compatible with the slip-clutch on your supercharger. Regular motor oil for gasoline-powered cars and trucks contains friction modifiers which can cause excessive supercharger slippage. AMSOIL Marine 10W-40 does not contain friction modifiers. Therefore, it possesses the ideal frictional properties for consistent supercharger performance. The synthetic makeup of this product also fights extreme heat. The service life of supercharger slip washers and bearings is optimized.

The Sea-Doo owners using Shell Rotella diesel oil may have cheap oil. AMSOIL 10W-40 Marine Synthetic Motor Oil not only offers 100% synthetic performance, it also delivers an anti-rust and corrosion package. AMSOIL delivers corrosion protection both in-season and during storage. This measure of protection alone is well-worth the upgrade to AMSOIL Marine 10W-40. AMSOIL products have always performed well versus BRP XPS Oils. We can confidently suggest that AMSOIL Marine 10W-40 will be a solid upgrade over the partial-synthetic XPS Summer Grade 4-Stroke Oil.

What About Ceramic Supercharger Washers?

Some Rotax 4-Tec models from 2004 to 2007 may still have ceramic slip washers on their superchargers. AMSOIL 10W-40 Marine Synthetic Motor Oil is 100% compatible with this material and will not weaken these washers. There was a myth out there ten years ago suggesting that synthetic oil could damage these ceramic washers. AMSOIL performed extensive testing to debunk this theory.

Most Sea-Doo owners of 2004-07 models have upgraded their supercharger’s ceramic slip-clutch washers to metal (or should be considering this upgrade). Regardless of whether your model has ceramic or steel supercharger washers, AMSOIL Marine 10W-40 will be perfect for your Sea-Doo 4-TEC engine.

We can offer AMSOIL 10W-40 Marine Synthetic Motor Oil at the lowest price in Canada or the United States. Contact us for a wholesale price list using the form on this page or call us at 1-800-748-5781. 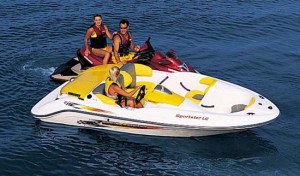 A reader asks: I’ve got a 2003 Sea-Doo Sportster LE Jet Boat with the “947” 951cc Rotax 2-stroke engine. What would be the correct AMSOIL 2-stroke oil for this engine? If this helps, here is an excerpt from my owner’s manual:

Caution: Do not use NMMA TC-W, TCW-2 or TCW-3 or other ashless type two-stroke oils.

Answer: Sea-Doo Rotax two-stroke engines are bit unique in that they require an oil designed for the API TC specification rather than an oil with the NMMA TC-W3 specification (which is commonly specified for marine engines). So with this being the case, our recommendations are either AMSOIL Interceptor Synthetic 2-Stroke Oil (premium choice) or AMSOIL “AIO” Synthetic 2-Stroke Injector Oil, which is a great replacement for XPS semi-synthetic or mineral 2-stroke oil. Let’s explore BRP/Sea-Doo’s reasoning for suggesting 2-stroke oils that differ from other personal watercraft and boat engine makers.

What Is The Difference Between API TC and NMMA TC-W3 2-Stroke Oils?

The main difference between the two specifications is the type of detergent ingredients used. Detergent additives maintain clean combustion chambers and exhaust ports. NMMA TC-W3 is a spec for marine applications that use “ashless” detergents. API TC is a 2-stroke oil specification mainly for dryland use (such as dirt bikes or snowmobiles) and these oils have “low ash” detergent additives. Low ash 2-stroke oils will create a small amount of ash during combustion that is sent out of the exhaust. Ashless 2-stroke oils do not create any ash residue during combustion.

The reason that marine outboard engines and dryland engines such as dirt bikes require these different detergent types in their 2-stroke oils is in the way they operate. Outboard engines have much lower combustion temperatures than dirt bikes or snowmobiles. They also generally see much more stable RPM levels. In outboard engines, ashless 2-stroke oil formulations will burn cleaner under these lower temp operating conditions, whereas API TC low ash oils can foul spark plugs and create deposits.

Why Is NMMA TC-W3 A Problem In BRP/Sea-Doo Rotax Engines?

Sea-Doo engines such as the 947 are derived from the Ski-Doo snowmobile engine family. These engines run hot, create big horsepower relative to their displacement and have variable exhaust valves. The detergents in ashless 2-stroke oils do not have the capacity to maintain clean combustion conditions in these potent engines. The result would be dirty “RAVE” variable exhaust values and performance-sapping deposits. Engine damage could also result. Despite the fact that your Sea-Doo is operated on water, an API TC 2-stroke oil is far more appropriate due to the way your engine is designed and the way it is operated.

Sea-Doo dealers and some message board warriors will insist that BRP XPS-2 Synthetic 2-Cycle Oil is the only oil you should ever consider for your Rotax 2-stroke engine. XPS 2-stroke oils from your Sea-Doo dealer are definitely not the only oil that is compatible with your Sea-Doo engine. We offer a 100% synthetic option that has been proven in testing against XPS-2 and has also been confirmed to be very effective in Rotax engines. Interceptor is far less expensive than XPS-2 Synthetic 2-Cycle Oil while offering improved lubrication (which improves power output) and engine deposit control that is equal to or better and than XPS-2 Synthetic. While the testing is performed in Ski-Doo snowmobiles with the latest Rotax DFI engines, the results are very much applicable to Sea-Doo engine use. See AMSOIL Interceptor Versus BRP XPS-2 Synthetic 2-Cycle Oil in Ski-Doo E-TEC Engines.

We can offer the premium AMSOIL Interceptor 2-Stroke Oil for your Sea-Doo Jet Boat or 2-stroke personal watercraft models at a price that is far better than the XPS-2 synthetic offerings at your Sea-Doo dealer. Contact us for a wholesale price list using the form on this page or call us at 1-800-748-5781.