Kyle and Jarret Biro once again prove their worth against Western Canada’s best motocross racers.

As we mentioned in our profile of Kyle Biro and his race bike, one of his big goals for 2015 was to have a good showing at the Western Canadian Amateur Nationals at Raymond, Alberta. The racing event was held this past weekend and to say that he accomplished the mission would be an understatement. Biro did not miss a mark all weekend winning Western Canadian titles in the MX2 Intermediate, MX3 Intermediate and Schoolboy classes. Not only did Kyle win the overall titles, he won all nine motos in the process. Kyle guided his Yamaha YZ250F to holeshots in all but one moto, essentially winning every race from wire to wire. For this impressive performance, Yamaha Canada awarded Kyle with a factory support ride for 2016. Kyle will receive a Yamaha YZF motocross bike for the season and along with parts support. 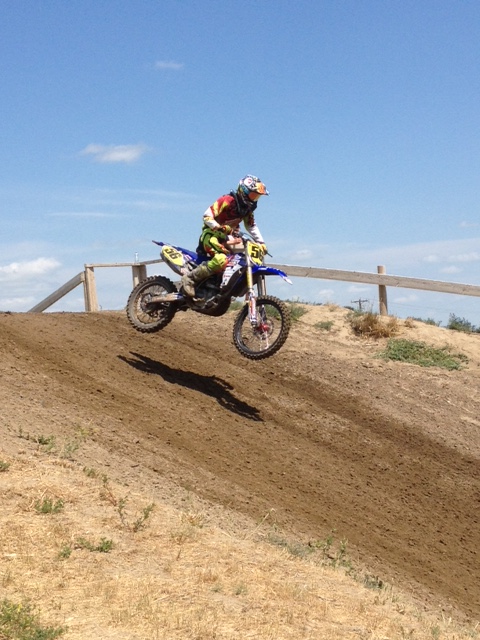 Kyle Biro lands a jump en-route to a sweep of all of his classes at the 2015 Western Canadian Amateur Motocross Nationals at Temple Hill Motorcycle Park.

Kyle Biro is on great form for his next target being the Trans Can Grand National Championships at Walton, Ontario, which takes place next month. Kyle will also participate in the Walton round of the CMRC Pro Nationals which takes place directly after the Trans Can amateur event. As this is Kyle’s first full season as an intermediate amateur, he can compete as an intermediate classified rider and still take part in National Pro races.

Not to outdone, Jarret Biro also had a very strong showing against Western Canada’s best with two podiums. Jarret finished third overall in both the MX2 Junior and the Schoolboy classes. He also finished 7th overall in the MX3 Junior class. A second moto DNF (due to a collision with another competitor) dragged down a strong 3rd in the first moto and 2nd in the third moto.

Jarret also shifts his focus on the Canadian Amateur Nationals as he aims to repeat his impressive podium performance of 2014 against Canada’s best young racers.

The Biro boys have depended on AMSOIL products for several seasons now. Kyle is running the AMSOIL 10W-40 Synthetic Dirt Bike Oil in his four-stroke YZ250F, while Jarret runs AMSOIL Dominator Synthetic Two-Stroke Oil (mixed at 40:1) in his Yamaha YZ125 engine and AMSOIL Dirt Bike 10W-40 in his transmission.