Ford is concerned that the new API CK-4 diesel oil spec does not mandate enough wear control additives. But fear not, there is a distinct work-around.

There’s a bit of controversy brewing regarding the brand new API diesel engine oil specifications that debut for 2017. Starting in December, the American Petroleum Institute (API) will start granting licenses for two new diesel engine oil specs. The API CK-4 specification will supersede the API CJ-4 spec that debuted back in 2006. A new low-viscosity spec for over-the-road transport trucks call API FA-4 will also be released. So why is there a controversy?

Ford has conducted in-house testing on API CK-4 and FA-4 formulations in their Powerstroke diesel engines. They were not pleased with the results. The FA-4 oils simply did not provide effective viscosity protection (read: too thin) and some CK-4 oils did not contain enough phosphorous to provide acceptable valve-train wear protection.

Phosphorous is a vital anti-wear agent in diesel engine oils. The current API CJ-4 spec mandates a maximum phosphorous content of 0.12%. This generally works out to over 1000 parts per million (ppm). Ford is finding that motor oil with a phosphorous content under 1000 ppm is causing excessive wear. The new API CK-4 spec mandates a phosphorous limit of 0.08%. This can leave some formulations with less than the 1000 ppm that Ford would like to see. But there is a way to avoid the new low phosphorous limit and still use API CK-4 oils in Powerstroke diesel engines.

Here is the vital distinction. The API is suggesting this lower phosphorous limit when a motor oil maker wishes to carry both the API CK-4 diesel specification AND the API SN passenger car/gasoline engine specification on the label. As the API SN limit for phosphorous is 0.8%, the API is requiring that any diesel engine oil also carrying the passenger car/gasoline engine spec must meet this lower limit. The good news is that “stand alone” diesel engine oils that do not label their product as meeting the API SN (or any other passenger car spec) can have a higher phosphorous limit of 0.12%.

In other words, as Ford is suggesting that the previous generation API CJ-4 oils do contain an acceptable allotment of phosphorous, “diesel only” API CK-4 oils should also be fine. Ford is coming up with their own diesel spec to clear up any confusion. It will be called Ford WSS-M2C171-F1. We can speculate that motor oils meeting this spec will either be API CK-4 oils that do not have the API SN designation or older API CJ-4 products.

Further clarification from the American Petroleum Institute. They tell us that 40-weight diesel engine oils (such as 5W-40, 15W-40, 0W-40) can have both the API CK-4 and API SN specs and still abide by the higher API CK-4 phosphorus limit. On the other hand, 0W-30, 5W-30 and 10W-30 engine oils carrying both the API SN and API CK-4 specs have to abide by the lower SN phosphorous limit of 800 ppm.

AMSOIL is releasing a full suite of brand new diesel engine oils in early 2017 that will meet the API CK-4 spec. Most will also be Ford WSS-M2C171-F1 compliant. We can only speculate as to whether these oils will also carry that API SN gasoline engine specification to make them more convenient for fleets. We know that the upcoming Signature Series Max Protection 5W-30 will also carry the API SN spec. It will be interesting to see if this product also carries the Ford spec. We will go out on a limb and guess that most of the upcoming line-up will be “diesel only” so that they can contain the 0.12% dose of phosphorus. We’ll know more in the weeks to come. AMSOIL has already indicated that they will have API CK-4 product choices that will be undeniably safe for all model year Ford Powerstroke engines.

The API is suggesting that the CK-4 oil standard will offer improvements in terms of oil longevity, shear stability and deposit control over the current CJ-4 spec. Once Ford releases their new diesel oil specification, Powerstroke owners should have an easier time finding safe formulations with the very latest motor oil technology.

AMSOIL’s bypass oil filter systems have never been suitable for bathroom duty. They use a very sophisticated filter media which leads the market with exceptional filtration efficiency, dirt-holding capacity and durability. Now AMSOIL has released two new systems that make for easy installation on Chevy/GMC Duramax diesel engines and Ford PowerStroke (6.0L and 6.4L) diesels. These oil filters systems remove soot and dirt down to less than 2 microns for extended oil life and reduced engine wear. 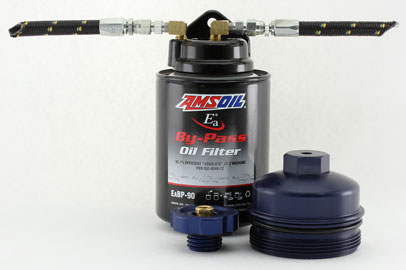 The new BMK-31 for modern Ford PowerStroke diesel engines is a single remote bypass filter. This means that a single bypass filter is employed, while the factory full-flow oil filter stays in place. The BMK-31 kit comes with all of the parts, filter base and spin-on bypass filter, hoses and fittings needed for easy installation. An ingenious billet aluminum full-flow oil filter cup replaces the stock unit (note the right-hand item in photo). A fitting on the end of this location draws a small portion of engine oil out of the full-flow oil filter housing and runs it through the bypass oil filter. The ultra-clean oil is then returned to the engine through a custom billet oil filler cap. The fit, finish and construction of all of the components of this kit are truly top shelf. 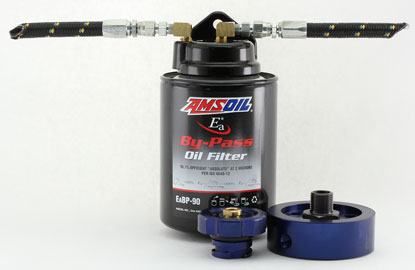 Like the Ford system, the BMK-32 system for GM Duramax diesel engines is an easily installed single by-pass filter system. In order to draw oil from the engine, AMSOIL uses a clever billet aluminum “sandwich adapter” that fits between the engine’s spin-on full-flow oil filter and the filter base (note the right-hand item in photo). Oil is drawn through a fitting on this sandwich adapter, passed through the oil bypass filter and then returned into the engine through a billet aluminum oil filler cap (that has a return fitting on top). The filter base, bypass filter element, hoses, fitting and parts are all included in this kit.

We can sell oil bypass filters systems at wholesale prices in Canada and the United States. Contact us for a price list using the form on this page or call us at 1-800-748-5781.

Your guess is as good as ours as to what factors are required to reach this specification. Many automakers offer up their own ambiguous motor oil specs, but for domestic vehicles, the API specifications are predominantly recognized. In the case of AMSOIL Synthetic Diesel 5w-40, it is API CJ-4 licensed and that’s all that most modern diesel owners truly watch for.

This AMSOIL Diesel 5W-40 is applicable for year-round use in the vast majority of diesel applications. It offers a -51°F cold pour point for winter use and low volatility for summer use. It also provides potent wear protection and improved fuel economy. Contact us using the form on your right for a wholesale synthetic oil price list.