Should AMSOIL Z-Rod Motor Oil be used in modern high-performance Chevy engines? You might be surprised by our answer. 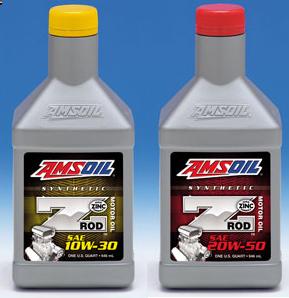 A reader asks: I’ve got a 2013 Camaro SS and my friend has a 2009 Corvette. Both cars have the LS3 engine and have aggressive aftermarket camshafts. The catalytic converters have been removed from the Corvette, while the Camaro has high-flow cats. Both cars see a mix of city, highway and occasional runs at the drag strip. The AMSOIL application guide suggests AMSOIL Signature Series Synthetic 5W-30 for both cars. In light of the fact that the Corvette has no catalytic converters, can AMSOIL Z-Rod 10W-30 be used in it? Would it be a major problem to use Z-Rod in the Camaro as well? The cam manufacturer tells us that more zinc is definitely better for these cams.

Our answer: In most cases you should not use AMSOIL Z-Rod 10W-30 Synthetic Motor Oil in modern engines as it was designed for classic cars and hot rods. Z-Rod has very high zinc and phosphorous content to protect the flat tappet cams of older cars. These high zinc and phosphorous levels can foul the catalytic converters found on modern cars and is generally not recommended. But both of these cars are an exception.

As the Corvette’s catalytic converters have been removed, your friend can safely use AMSOIL Z-Rod 10W-30 and enjoy the extra anti-wear protection with no downside. In the case of your Camaro with high-flow catalytic converters, going to the high-zinc formula of Z-Rod may lead to deterioration of the cats over the very long term, but the trade-off is improved protection of the aftermarket cams.

Z-Rod’s higher levels of zinc and phosphorous will not have an effect on oxygen sensors or other emissions devices. Contrary to popular belief, high zinc does not clog catalytic converters, it simply causes deterioration of the internals. If your oil consumption is minimal, you may never have any issues. Again as both cars have aggressive cams and are raced occasionally, the extra protection offered by Z-Rod over modern passenger car motor oil formulas is a safe and sensible trade-off.

So while the AMSOIL Signature Series Synthetic 5W-30 is the best choice for late model Corvettes and Camaros in stock trim, you can safely go with the classic formula of AMSOIL Z-Rod Synthetic Motor Oil in some modified or raced cars. If your car is unmodified, using a high-zinc motor oil can lead to premature catalytic converter degradation and is not the best choice.