A reader asks: I use my 2006 Honda Rincon ATV all year-round. It is used for pushing snow in the winter and for trail riding in the summer. The AMSOIL application guide suggests 2 different engine oil options for my model. It says I can use either the AMSOIL Synthetic 10W-40 ATV Oil or the AMSOIL Formula 4-Stroke 0W-40 Synthetic Oil. Is it possible to use one of these engine oils for both summer and winter?

Our Answer: Yes it is possible to choose just one of these oils, rather than switch products seasonally. Either of these synthetic oils would be quite suitable for winter and summer service as they both flow exceptionally well in extreme cold. But as you run your ATV in winter, we would tend to lean to toward AMSOIL Formula 4-Stroke 0W-40 Synthetic Oil. Formula 4-Stroke 0W-40 has a cold pour point of -51°C (-60°F). The Synthetic 10W-40 ATV Oil has a very respectable cold pour point of -44°C (-47°F), but we would opt for the 0W-40 for that extra measure of cold-start protection.

But is it OK to use a 0W-40 ATV oil in the summer heat? It’s more than OK. Remember that AMSOIL Formula 4-Stroke 0W-40 is still a 40-weight oil at operating temperatures. It is also test-proven to be exceptionally shear-stable. This means that it resists thinning out, no matter how hard you thrash your engine in the summer heat. Below is a chart illustrating how well Formula 4-Stroke 0W-40 Synthetic Oil maintains its viscosity compared to Polaris Synthetic PS-4 Plus and Arctic Cat Synthetic ACX in ASTM-7109 Shear Stability testing. Both the Polaris and Cat oils are 50-weight engine oils and each lost a third of their viscosity in the test process. AMSOIL 0W-40 stays steady and maintains its 40-weight viscosity. 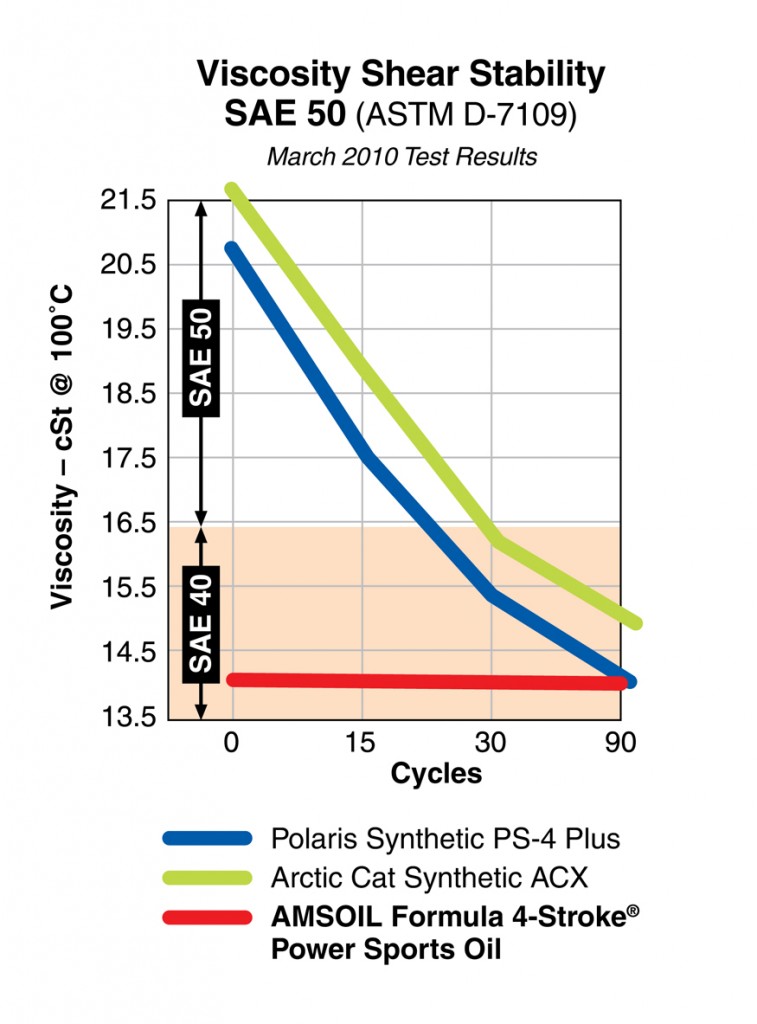 So while either the AMSOIL 0W-40 or 10W-40 would be outstanding for all-season engine/transmission service in your ATV, we give the nod to the Formula 4-Stroke 0W-40 Synthetic Oil for its slight advantage in extreme winter cold.

A reader asks: I have been using ATF in the front differential of my 2012 Polaris Sportsman 400HO for a while now. I see Amsoil now has specific fluid for Polaris front ends with the Hilliard clutch set-up. Is it OK to keep running the automatic transmission fluid? 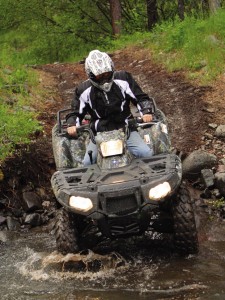 ATF may not be the best oil for your Polaris ATV Demand Drive front differential. (photo credit: atvillustrated.com)

Answer: While we know that some Polaris owners with the Demand Drive 4X4 front differential system do use all-purpose automotive ATF, it might not be the best option. Automatic transmission fluid may have acceptable frictional properties to help your 4X4 clutch system engage and disengage in a satisfactory fashion, but it may be lacking in terms of long-term wear control.

Hilliard Corporation supplies the front drive system for your Polaris (and some John Deere Gator models). This front differential contains an electrically actuated clutch that engages and provides power to the front wheels whenever the rear wheels lose traction. The system disengages when the rear wheels regain traction.

Hilliard originally recommended a tractor transmission/hydraulic oil for this differential with viscosity of 9.3 cSt at 100°C. AMSOIL designed their Synthetic ATV/UTV Front Drive Oil for Polaris Demand Drive Systems to not only have the proper additives, frictional properties and wear control; its viscosity is also precisely 9.3 cSt at 100°C. A typical ATF for automotive use is in the 6.0 to 7.5 cSt range at 100°C. This means that automatic transmission fluid is considerably thinner than the viscosity suggested by Hilliard.

So while ATF may work, it is not an ideal replacement oil for your Polaris Demand Drive 4X4 system.

Can AMSOIL’s motorcycle and ATV oils be used in other categories?

Answer: Absolutely. AMSOIL Metric 10W-40 is quite capable in dirt bike or ATV engines and transmissions. Until recently, the “MCF” Metric 10W-40 formula was AMSOIL’s only 10W-40 option for dirt bikes, street bikes and ATV’s. Note that it was used quite successfully in professional racing (both road racing and motocross).

AMSOIL released the off-road-specific Dirt Bike Synthetic 10W-40 earlier this year and its main attribute is the ability to combat clutch fade and slippage under extreme loads. The Metric 10W-40 Motorcycle Oil will provide superb service in dirt bikes, but the Dirt Bike formula is a bit of an upgrade for racing or extreme off-road operating conditions.

As for ATV’s, AMSOIL also released an ATV Synthetic Oil Series earlier this year (including a 10W-40). It too is formulated for severe off-road conditions. Metric 10W-40 would certainly provide commendable performance and protection and would be an upgrade over other ATV oil brands.

All this being said, the ATV 10W-40 or Dirt Bike 10W-40 can also admirably replace Metric 10W-40 in your street bike. The common thread of all of these products is that they are suitable for wet-clutch service and have an elite synthetic composition. Suppose that you need the robust staying power of the Dirt Bike formula for a motocross bike, but you also have a street bike and ATV and want to keep only one product around for convenience. You could easily use Dirt Bike 10W-40 in the street bike and ATV and the same could be said of the ATV 10W-40.

The bottom line is that all of these products are formulated to provide great performance in their respective category, but all of these applications require an engine oil with similar performance characteristics. So one product can be used in street bikes, ATV’s and dirt bikes, provided that they all call for the same viscosity.