A reader asks: I bought a used 1998 Heritage Softail Classic with 47,000 miles. As far as I know, only mineral oil was used in this bike. I’ve heard good things about using AMSOIL Synthetic 20W-50. Is there any problem with switching to synthetic oil in an older engine? Will it leak or use oil?

Our answer: It is certainly acceptable to switch to synthetic oil in an older Harley-Davidson engine. If the engine is mechanically sound, there should not be any problems. Synthetic oil can be used in older transmissions and primary chaincases as well.

Despite its age, your engine is not “adapted” to only conventional oil. It does not matter if the engine was broken-in using mineral oil. The switch to synthetic oil can take place at any time.

Once converted to synthetic oil, the motorcycle will now have improved performance on a number of fronts. AMSOIL V-Twin 20W-50 lowers friction and withstands extreme heat. Here are the improvements that our customers observe.

Will synthetic oil cause leaks or consumption in an older motorcycle engine? If the seals are sound and the engine has not had serious oil consumption problems, all should be just fine. AMSOIL V-Twin 20-W-50 has a greater resistance to volatility over regular motorcycle oil. This means less oil usage on very hot days.

In conclusion, switching to a top-tier synthetic oil like AMSOIL is the most cost-effective upgrade you can perform on your Harley-Davidson motorcycle. This is true of brand-new models or older bikes.

A reader asks: I’ve got a 2019 Harley-Davidson Street Glide with the Milwaukee-8 107 engine. When using conventional 20W-50 oil, I hear a valve ticking noise at about 2100 RPM. Will AMSOIL Synthetic 20W-50 cure this noise?

Our answer: Some customer feedback seems to suggest that this particular valvetrain noise disappears once they switch to AMSOIL V-Twin Synthetic 20W-50.

Please note that we haven’t personally witnessed this, nor is this a claim made by AMSOIL Inc. But this is customer feedback we have received regarding the use of AMSOIL 20W-50 in the the Milwaukee-Eight engine.

It would have something to do with the robust additive package in this synthetic 20W-50. AMSOIL formulated this oil to provide a powerful anti-wear barrier. This no-doubt contributes to overall smoother and quieter v-twin operation.

Another factor is that AMSOIL 20W-50 also lowers friction. Harley customers constantly comment that their engines have better throttle response than with other oils.

AMSOIL V-Twin Synthetic 20W-50 is a favorite with owners of all types of Harley-Davidson engines. We routinely hear about noticeably cooler operating temperatures and smoother performance. This AMSOIL 20W-50 is probably the most cost-effective upgrade you can make for your Harley-Davidson motorcycle.

In conclusion, the Milwaukee-Eight engine is Harley’s latest and most refined engine ever. It is designed to run considerably smoother than the Twin-Cam engine it replaced. AMSOIL V-Twin Synthetic 20W-50 can optimize this smoothness and protect your investment.

Have questions or would you like to see wholesale pricing? Contact us using the form on this page. 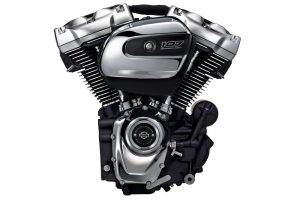 Harley Davidson is offering a brand new V-Twin engine for the 2017 model year. The “Milwaukee-Eight” is just the eighth big twin engine design in Harley’s 114 years of existence. This new engine replaces the “Twin-Cam” engine that has been in service since 1999.

These recommendations apply to all versions of the 107ci and 114ci Milwaukee-Eight engine.

Engine Oil- AMSOIL Synthetic 20W-50 V-Twin Motorcycle Oil is a legendary performer in Harley V-Twin engines and the Milwaukee-Eight will be no exception. Benefits include:

There is no better way to provide long-term protection for your Harley-Davidson engine.

Oil Filters- We offer two oil filter options that fit both the 107 and 114 Milwaukee-Eight engine.

These V-Twin oil filters feature strong construction, high-capacity and the ability to remove fine particles. The synthetic filter media removes 98.7% of particles at 20 microns (which is pretty darn fine!). This further helps with maximizing engine life. The high-capacity media holds contaminants over long intervals. You can depend on the heavy-duty construction of these filters to provide steady service over long journeys.

Transmission Fluid- There are two options for the Milwaukee-Eight transmission.

Flip a coin between these two. The viscosities are similar and both provide outstanding gear protection and improved shifting. The V-Twin Synthetic Transmission Oil is specially formulated for those that prefer a dedicated transmission oil. The 20W-50 V-Twin Motorcycle Oil is designed to provide top-shelf gear protection and shifting. It has an advantage in terms of convenience and as you use the same product in all three holes.

Both are proven performers. Choose the dedicated primary fluid or the convenient V-Twin 20W-50. Either product will keep your chaincase safe and sound for many, many seasons.

What Is Different About The New Milwaukee-Eight Engine?

Improvements Of The New Milwaukee-Eight Over Twin-Cam Engines

How Does the New Milwaukee-Eight Engine Sound? 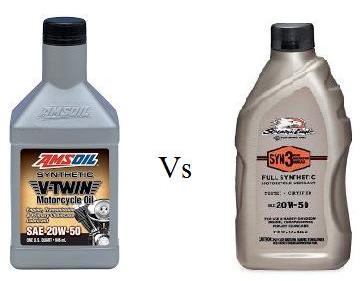 So you’ve made the decision to switch to synthetic oil in your Harley-Davidson this year. But which product should you use? We make the case that AMSOIL Synthetic 20W-50 V-Twin Motorcycle Oil is superior to Harley’s Screamin’ Eagle SYN3 Full Synthetic 20W-50 in both quality and price.

AMSOIL does not allow us to publicize wholesale prices. But we can show you on a percentage basis how the price of AMSOIL V-Twin Synthetic 20W-50 compares to Screamin’ Eagle SYN3 Full Synthetic 20W-50. The AMSOIL pricing data below is based on wholesale prices when purchasing a full case and meeting our free shipping threshold. Remote destinations may have extra shipping charges. Request a price list using the form on this page.

The prices listed below for Screamin’ Eagle SYN3 Full Synthetic 20W-50 Motorcycle Oil are based on suggested retail prices published by Harley-Davidson for the Canadian and US markets. Prices may vary at some Harley-Davidson dealerships.

Contact us for a wholesale price list using the form on this page and we’ll show you how easy and cost-effective it is to upgrade your Harley-Davidson motorcycle to AMSOIL V-Twin Synthetic 20W-50.