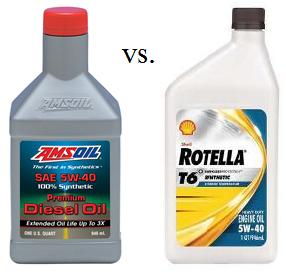 As we mentioned in a recent post, Chrysler has just changed the engine oil recommendation for their EcoDiesel engine in some Ram 1500 and Jeep Grand Cherokee models. Their previous suggestion of a European spec 5W-30 has been changed to API CJ-4 5W-40 diesel oil. As Chrysler seems to have an arrangement with Shell Oil, dealers are pushing Shell Rotella T6 5W-40. We would submit that AMSOIL Premium 5W-40 Synthetic Diesel Engine Oil would be an upgrade over Shell’s offering. Let’s examine some key distinctions between these two products.

The cold pour point of an engine oil is measured by freezing the oil in a lab test. The temperature where the oil stops flowing is considered its cold pour point. AMSOIL 5W-40 Synthetic Diesel Engine Oil offers an 8.69% cold pour point advantage over Shell Rotella T6 5W-40. That may not seem like a huge margin, but in frigid winter temps, that extra measure of cold start protection can be critical.

An engine oil’s “TBN” (total base number) is the measurement of its reserve alkalinity. In simple terms, this is an engine oil’s capacity to neutralize acids and combustion by-products. A strong, long-lasting TBN is vital for diesel engines. It protects engine internals from corrosion and allows for longer service life. The chart on the right comes from real world testing conducted by AMSOIL against several popular competitors. We’ll focus on AMSOIL and Shell Rotella in this post.

Why is AMSOIL Premium Diesel 5W-40’s TBN retention superior to that of Shell Rotella T6 5W-40? This illustrates how AMSOIL used superior additive chemistry. The detergent additives required to maintain robust TBN levels are expensive, so obviously AMSOIL pulled out all the stops when formulating DEO 5W-40. This factor alone means that AMSOIL Premium Diesel Synthetic 5W-40 will deliver a high level of acid, sulfur and combustion by-product neutralization from the beginning to the end of its service life. It also suggests that AMSOIL Premium Diesel 5W-40 is capable of a much longer service life than Shell Rotella T6 5W-40

After 400 hours of operation, the overall viscosity loss of both AMSOIL Premium Diesel 5W-40 and Shell T6 5W-40 was quite similar. Shell T6’s viscosity dropped much earlier on in the testing.  AMSOIL 5W-40’s viscosity went down by 13.10%, while Shell T6 5W-40 lost 15.49% of its original viscosity. Note in the chart that the Shell product drops into the 30-weight category after only 200 hours, while AMSOIL 5W-40 stays in the 40-weight range for the full 400 hours.

You get what you pay for when it comes to diesel engine oils. AMSOIL Premium Diesel Synthetic 5W-40 has proven itself to be superior to Shell Rotella T6 5W-40 in these three important benchmarks.

We can sell AMSOIL Premium Diesel Synthetic 5W-40 Engine Oil at wholesale prices in Canada or the United States. Contact us for prices using the form on this page.