A reader asks: I am looking for a two-stroke injector oil that is the same quality as the Evinrude XD50 Synthetic Blend 2-Cycle Oil. Is AMSOIL HP Marine the closest match? I’ve got an older outboard, but still looking for a decent injector oil.

Our answer: A fairer comparison would be AMSOIL HP Marine to the full-synthetic Evinrude XD100 2-Cycle Oil. HP Marine will definitely be an upgrade over the semi-syn XD50.

HP Marine is a 100% synthetic 2-stroke oil and is very much an elite product. It is at the pinnacle of two-cycle oil technology. The best part is that at our wholesale prices, it can be less expensive than the synthetic-blend XD50 oil.

AMSOIL has performed extensive testing in Evinrude ETEC engines versus XD100 and the results were very impressive. Even using the “lean setting” in ETEC, HP Marine delivered superb wear protection.

Some may consider HP Marine to be overkill in an older outboard. We would suggest that it’s low-deposit, low smoke, clean burning, low friction contributions would be welcome in any outboard engine. But we do have another option.

An Even Less Expensive Full Synthetic Option To XD50

For those wanting an even less expensive option for older outboard engines, we do have another full-synthetic 2-stroke oil. AMSOIL Synthetic 2-Stroke Injector Oil offers features like low smoke/odor, optimum throttle response and synthetic wear control. It is suitable for DFI (direct fuel injection) outboard engines, as well as older snowmobiles or

personal watercraft. This Synthetic 2-Stroke Injector Oil is a great value and a top-notch performer in older 2-stroke outboards.

Either AMSOIL HP Marine or Synthetic 2-Stroke Injector Oil would be an upgrade over Evinrude XD50 Synthetic Blend 2-Cycle Oil. Both AMSOIL products can deliver a performance upgrade at a better price (with our wholesale programs) than the oils found at Evinrude dealers.

Contact us for a wholesale price list using the form on this page. We can ship synthetic outboard 2-cycle oil to any location in Canada or the United States at a great price.

A reader asks:  I’ve got a 1995 25-horse Johnson outboard engine. Can a newer synthetic 2-stroke oil like HP Marine be used? Is there any risk that it will plug the carb or cause gelling?

Our answer: There is absolutely no problem with running the latest synthetic 2-stroke oils in older engines. In fact, there is nothing but upside to using a modern synthetic oil in an older two-stroke engine. This applies not only to outboard engines, but also older generations of snowmobiles, motorcycles, chainsaws, or ATVs.

There is no risk of gelling or carburetor plugging from synthetic 2-stroke oil formulated for the latest 2-stroke engines. In fact, the opposite will occur. AMSOIL 2-stroke oils like HP Marine will provide cleaner engine internals and a strong resistance to engine deposits.

So yes, you can confidently use a modern 2-stroke oil in an older engine. Note that AMSOIL also offers a budget-priced synthetic 2-cycle oil that is also a great option. AMSOIL Synthetic 2-Stroke Injector Oil has a smaller price tag, but still offers all of the synthetic benefits. It is a versatile option that is a great fit for older two-cycle engines. Like HP Marine, AMSOIL Injector Oil can be used in oil injection systems or as a premix at 50:1. A great fit for older 2-stroke dirt bikes and snowmobiles is also AMSOIL Interceptor.

AMSOIL has discontinued Saber Outboard Synthetic 2-Stroke Premix Oil in Canada because of low sales. But fear not, AMSOIL has two other synthetic oils that are fantastic substitutes for Saber Outboard in 2-cycle outboard engines. Both of the products shown below will perform as well or better than Saber Outboard.

While this product is is called an “Injector Oil”, it is also designed to be used as a 50:1 premix. Synthetic 2-Stroke Injector Oil is AMSOIL’s value-priced synthetic 2-stroke oil. This product would be

a great option for older outboard engines. Here are the features and benefits of AMSOIL Synthetic 2-Stroke Injector Oil.

HP Marine is AMSOIL’s premium synthetic 2-stroke marine engine oil. Pre-mix at 50:1 or use in oil injection engines. Here are the features of AMSOIL HP Marine.

If you have questions, feel free to contact us using the form on this page or call us at 1-800-748-5781. We can sell AMSOIL synthetic 2-stroke oil at dealer cost in Canada and the United States.

Why Is Mercury Optimax 2-Cycle Oil A Synthetic Blend?

Mercury has long been an advocate of using semi-synthetic blends for both their premium 2-stroke and 4-stroke engine oils. Is there a particular benefit to using synthetic-blend oils in Mercury Marine engines? The short answer is no. There is no mechanical, metallurgical or any other functional reason for synthetic-blends to be any sort of advantage in Mercury outboard engines. Mercury does not offer any sort of explanation for this reasoning.

It’s a safe to assume that Mercury uses synthetic-blends rather than full-synthetic oils because it keeps input costs down. As synthetic oils are irrefutably proven to be superior in high-performance 2-stroke marine, snowmobile and motorcycle applications, there is absolutely no other basis for Mercury to take this route. Lastly, Mercury’s literature offers that Optimax/DFI 2-Cycle Oil is graced with a “carefully modified base stock blend with a synthetic additive package”. There is absolutely no implication that this product is 50% synthetic.

Below is an average of suggested retail prices found at random Mercury Marine dealerships. Prices may vary in your region. Mercury OptiMax/DFI 2-Cycle Oil is sold in 4-litre and 10-litre containers in Canada and 1-US gallon (3.78L) and 2.5-US gallon (9.45L) jugs in the United States.

AMSOIL prohibits us from publishing their wholesale prices, but we can illustrate on a percentage basis how the price of AMSOIL HP Marine Synthetic 2-Stroke Oil compares to Mercury OptiMax/DFI 2-Cycle Oil. The AMSOIL HP Marine pricing data below is based on wholesale prices when purchasing a full case of 4X1 US gallons with average shipping charges included. Remote destinations may have extra shipping charges. HP Marine comes in US quart and US gallon formats and beyond that, they step up to kegs and drums.

Again, the AMSOIL prices in this comparison are based on wholesale prices when purchasing a full case of four gallons and include average shipping charges.

Consider that AMSOIL’s HP Marine 2-Stroke Injector Oil is a full synthetic formula that is designed to be safe and highly effective in the newest DFI 2-stroke engines. Yet it costs considerably less than the synthetic-blend Mercury OptiMax/DFI 2-Cycle Oil found at boat dealers. In our opinion, AMSOIL’s delivers legendary quality and is a great value at any price. The quality of OEM oils tends to be adequate, while the price tag tends to be anything but. Just because Mercury puts their name on the jug does not mean that it is the best oil for your engine.

Contact us for a wholesale price list using the form on this page or call us at 1-800-748-5781 and we’ll show you how easy and cost-effective it is to upgrade your Mercury OptiMax outboard engine to AMSOIL HP Marine Synthetic 2-Stroke Oil. We ship from warehouses in Canada and the United States. 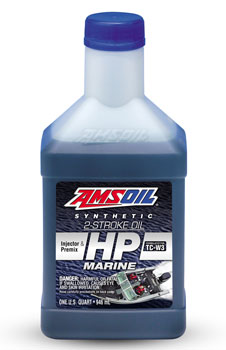 If you are having trouble finding AMSOIL HP Marine Synthetic 2-Stroke Injector Oil for your boat this summer, we will be happy to help. Now that Canadian Tire no longer sells HP Marine, you may not easily find it at a retail outlet. But we can offer it at a price that will beat any parts counter in Canada and ship it to your door in just a day or two.

HP Marine is an elite, 100% synthetic oil for 2-stroke outboard engines that is suitable for any motor requiring the NMMA “TC-W3” specification. It is test proven in Evinrude E-TEC engines and other DFI (direct fuel-injected) applications. HP Marine is a high quality upgrade for the following 2-stroke oils:

This is a question that pops up more than once every snowmobile season, so let’s delve deep into the pros and cons of running AMSOIL HP Marine Synthetic 2-Cycle Oil in snowmobile engines. AMSOIL exclusively recommends their Interceptor Synthetic 2-Stroke Oil for modern 2-cycle sleds in recreational use.

Why would one consider a boat oil for snowmobile use?

There are a couple of reasons why some snowmobilers may wonder about using HP Marine in their winter toys. The first reason is that some sled owners also have 2-stroke boat engines and wish to keep just one product around for both their marine and snowmobile applications. The second possible reason is that Interceptor costs just over a dollar per quart more than HP Marine and some budget-minded riders wish to explore this option.

What is the difference between AMSOIL HP Marine and Interceptor?

HP Marine is an “ashless’ two-stroke oil formula that is suitable for marine applications requiring the NMMA TC-W3 specification. “TC-W3” is an industry rating for outboard two-stroke oils. “Ashless” means that the detergent additives in the oil are non-metallic and will not create any ash deposits in the engine during combustion. HP Marine delivers superior performance in modern direct fuel-injected (DFI) models.

Interceptor is AMSOIL’s offering for high performance, recreational two-stroke engines and is their most popular snowmobile oil. Interceptor is a “low ash” formula for applications requiring the API TC specification. This specification was developed for high output/high RPM two-cycle engines. “Low ash” detergent additives have metallic compounds which forms ash residue during combustion. This ash burns up and is evacuated through the exhaust stream. Interceptor is widely acclaimed for exceptionally clean performance in engines equipped with variable exhaust power valves.

The ashless and low-ash aspects of HP Marine and Interceptor are rarely discussed, but they are vital in drawing a distinction between the two products.

Ashless or Low ash- Why does this matter?

There is a critical justification for marine two-stroke engine needing ashless detergent additives and high performance two-stroke applications like snowmobiles (and some personal watercraft and motorcycles) requiring a low-ash formula. It all has to do with operating conditions.

It is important to note that some snowmobile manufacturers strongly urge against using ashless or TC-W3 two-stroke oils in their engines. Ski-doo/BRP is especially vocal on this point.

Does this mean that HPM is a lower quality oil compared to Interceptor?

Not at all! It is simply designed to perform under entirely different operating conditions. In fact, AMSOIL does suggest that HP Marine can be used as a secondary option in some applications requiring an API TC (low ash) two-stroke oil. This is due to HP Marine’s high quality synthetic base oil and elite additive package. HP Marine is truly exceptional in its marine domain as it excels in the rigorous Evinrude E-TEC Lean-Mix setting field trial.

Interceptor is one of AMSOIL’s flagship products and is wildly successful in the snowmobile market. Despite its superb protection and performance in high-output two-strokes on dryland, like other low-ash two-stroke oils, it would not be suitable for the staid operating conditions of the average outboard engine. Excessive engine deposits and fouled plugs could be the result.

So the distinction is simple. Boat- use HP Marine. Snowmobile- use Interceptor for high-performance or newer machines.