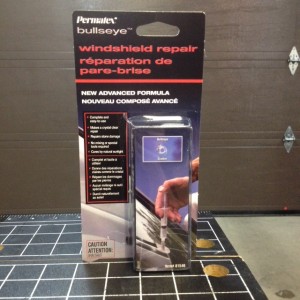 Note that we do not sell this product and have no relationship with Permatex or any of its subsidiaries.

Update: September 29, 2014- We had to perform another windshield repair on a family vehicle over the weekend and picked up the 3M Windshield Repair Kit at a nearby store. As mentioned in this article, the 3M kit does not have great online reviews, but we came away impressed. We repaired a stone bruise that was about 1cm in diameter and the results were quite adequate. Sorry we did not have a camera handy! An advantage of the 3M kit over the Permatex kit is that you can repair multiple stone chips with one kit, whereas the Permatex kit is a “one and done” application. The Permatex kit seems to offer a better process for pulling air from the damage in order to get more complete injection of the resin. But we can’t swear that it does a better job over 3M. Our verdict is that if we had one stone chip to repair, we’d opt for Permatex. If we had a few chips to repair, we’d go with the 3M kit.

Stone chips on your car’s windshield are more than just a cosmetic irritant. If a chip or bruise is predisposed to spreading, a minor ding can eventually destroy your expensive windshield. Have you priced one of those out lately? Ouch.

After a recent family trip, we noticed a tiny pit in the upper visor region of the passenger side. Small pits are often harmless, but this one had two little “wings” coming out of each side. This was one stone pit that has the potential to run amuck, so we began exploring options. Professional stone chip repair tends to cost anywhere from $50 to $75, depending on the firm and the severity of the damage. Not bad a bad price to pay if the repair saves your windshield.

There are also several “do-it-yourself” windshield chip repair kits on the market that (according to consumer reviews), seem to be fairly effective. As we enjoy trying the do-it-yourself option on many tasks and as this stone ding was relatively minor, we opted to give one of these kits a go.

The two kits available nearby were made by 3M and Permatex. The reviews on the 3M kit were less than flattering while the Permatex kit reviews were favorable (on average). As we had great results using the Permatex Rearview Mirror Adhesive Kit earlier this year, we felt comfortable opting for the Permatex Bullseye Windshield Repair Kit. This kit can retail anywhere from $12-$17.

Before using one of these kits, keep in mind that you should not expect the repair result to be 100% invisible. Permatex states this on the packaging. While this caveat may be an effort to head off any disappointment in the appearance of the outcome, the ultimate goal of this process is to prevent a stone chip from spreading. As our stone chip is in an area of the windshield that is completely inconsequential, we thought we’d take a flyer on the Permatex kit.

Below is the stone chip in question. It is about 6 mm in length and was very difficult to see in a photo. We placed painters tape on the outside of the windshield to provide improved contrast. 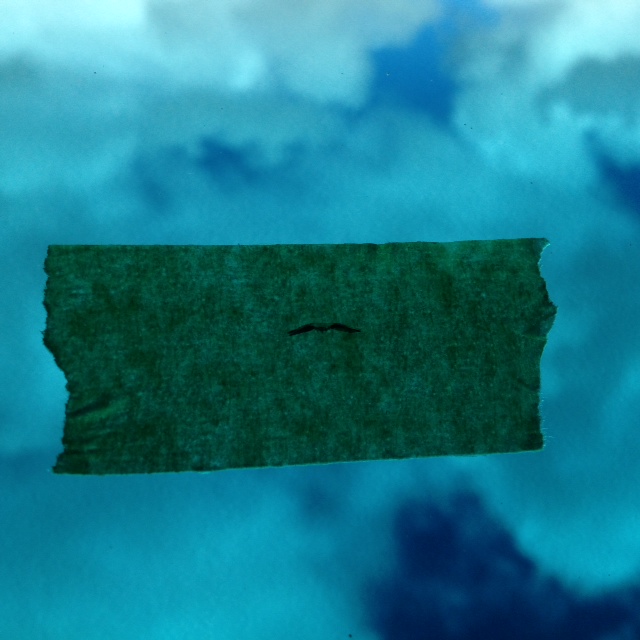 Here is the stone chip before the repair. Note the seagull shaped item in the middle of the painters tape.

Permatex produced an outstanding YouTube instructional video as shown below. It complements the instructions included with the kit and is well-worth a view or two before tackling this project.

A Few Notes Before Starting

Items shown in the video that are not included with the product include alcohol wipes (for cleaning the area), a push pin for cleaning out the pit of the damaged area and a razor scraper. Do have rubbing alcohol and paper towel, a pin or fine tool for cleaning loose glass from the pit and a scraper on hand before starting.

Also Permatex suggests that the windshield temperature be between 10°C and 24°C for best results. We are not sure whether this process would work in a heated shop during the winter. The final step involves parking the vehicle in the sun to cure the resin. It may work, but with much longer curing times. We carried out this job in a garage on sunny 23°C day. We had plenty of sun for the final curing process.

We were initially disappointed with the finished result as the wings of the stone ding seemed to still be noticeable. We wondered if we had failed or if the product was ineffective. We knew that we had a good seal during the critical “injection” process, so we were fairly confident that we had held up our end of the bargain. Then we compared the “after” photo to the “before” photo and began to change our tune. The wings of the shone chip that were so evident in the “before” photo were barely detectable in more than a dozen “after” photo tries. That tells us that the resin of the repair kit did indeed penetrate the stone blemish and should prevent spreading.

We took photos from every angle and in all sorts of light and this was the best one. 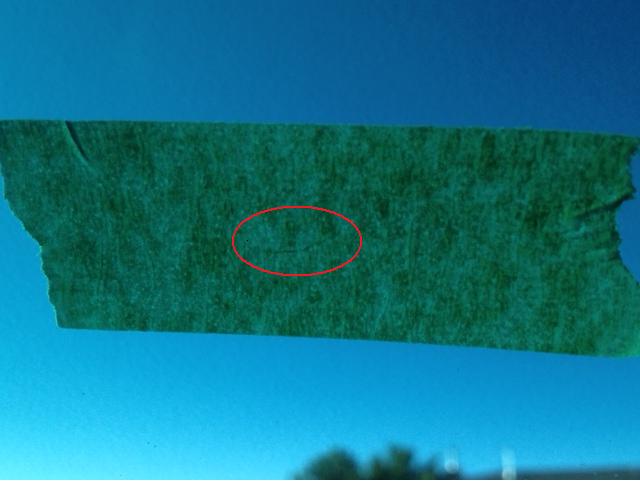 Again we used painters tape on the outside of the windshield to allow the stone crack to show up in the photo. Note that the crack is definitely finer than in the “before” image.

We give Permatex top marks for instructions and overall quality of the kit components. Everything fit and sealed well and went exactly according to plan. Again, the above video is an invaluable learning tool. Ultimately, the final judgement on whether or not this process is a complete success will happen next winter. If the stone ding does not spread, then we can call this repair a success. If it does spread, we will provide an update at the top of this very page.