On many vehicles, one of the most susceptible places for rust to start is on the seam at the bottom of the inside of the doors. As you can see in the photo below of my sister-in-law’s 2001 Grand Am, the sheet metal is pressed into a seam at the bottom. As the very bottom of the door is not sealed (on many vehicles), water and salt-spray can make its way into this area and settle on this seam. Naturally over time rust develops.

This malady can be prevented quite easily. Spray AMSOIL Metal Protector (MP) over this area a few times per season and allow it to dry. Metal Protector leaves a clear, dry wax-like film that prevents rust and repels salt water. Metal Protector is also a superb light synthetic lubricant for car door locks, latches, hinges and about a million other purposes around the car, house and shop. For heavy duty rust protection, try AMSOIL Heavy Duty Metal Protector (MPHD). MPHD is also applied as a spray, but leaves a thicker, tougher wax-like film which is impervious to rust. The only downside to using MPHD over MP in this application is that it leaves a brown film which may not be aesthetically pleasing to some. As a rust preventative, MPHD is beyond reproach. Do not use Heavy Duty Metal Protector for applications that require a light lubricant such as locks. MPHD is meant for heavier applications such as chains or as an undercoat on any metal or body panel exposed to the elements. If rust has already formed, it’s progress can be retarded with either MP or MPHD, but ultimately the best solution is to have the rust repaired by a body shop. Both Metal Protector and Heavy Duty Metal Protector are very inexpensive and serve as effective insurance against rust and as high performance synthetic lubricants in many other applications. 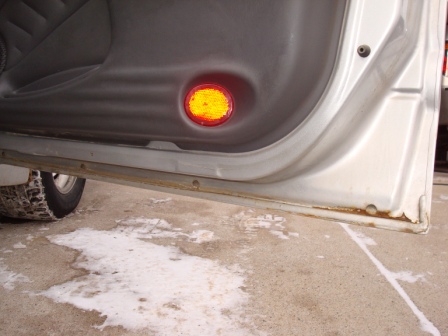