Designers are revisiting an old engine concept that could impact the internal combustion engine as we know it. This design is the “opposed-piston, opposed-cylinder” engine or “OPOC”. EcoMotors International is working on a two-stoke, turbo-diesel OPOC configuration that is making waves in the heavy-duty engine industry.

We mention that this is an “old” concept as early renditions of the OPOC engine were developed back in the early 1900’s. Over the decades it was used in some aircraft and military applications, but never found its way into the automotive or commercial markets.

An OPOC engine is different from a conventional engine in that it does not have a cylinder head or valve-train. Instead, the engine consists of two horizontal cylinders at both ends with opposite facing pistons in each. Advantages include: 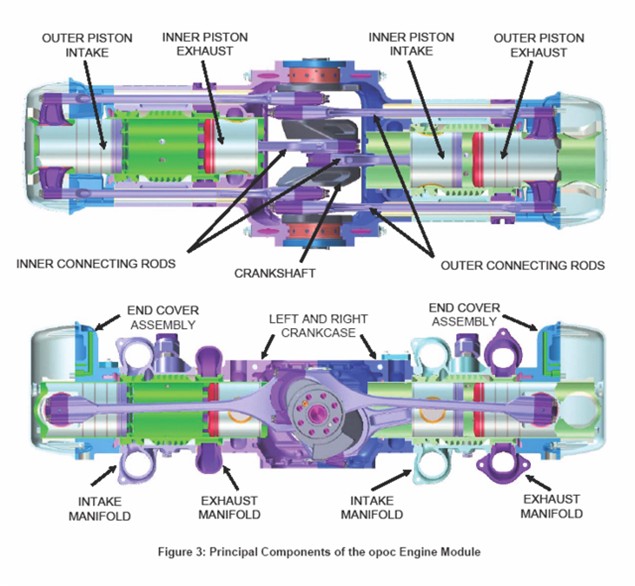 This concept could also be incorporated as a gasoline engine. EcoMotors claims that a small car could achieve upwards of 100 mpg with an OPOC engine.

EcoMotors was founded by former Volkswagen engineer Peter Holfbauer. Holfbauer had been toying with the OPOC concept for several years before bringing EcoMotors to life. An interesting concept is one thing, but it’s nothing without backing. Cash and credibility is brought to the table by heavyweights like Bill Gates and Silicon Valley venture capitalist Venod Khosla who have invested millions in the project. Diesel engine maker Navistar has added its heft by joining EcoMotors in a developmental deal. In the video below, Mr. Holfbauer discusses the OPOC engine and the exciting prospects for his company.

Vote for Marcel Irnie in Champion Spark Plug Video Contest How Long Can You Power an iPhone on a Gallon of Gasoline?
Scroll to top