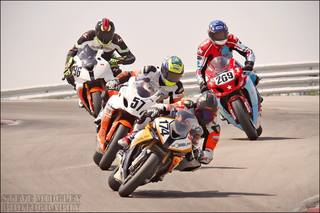 AMSOIL-sponsored motorcycle road racer Marcel Irnie of Kelowna, BC wrapped up three class titles in the US-based WERA West series this past weekend.

The final race of this series took place at Miller Motorsports Park near Salt Lake City, Utah and Irnie had a chance to clinch championships in the Superbike Expert, Super-Stock Expert and Formula 1 Expert classes. Irnie put an exclamation point on his WERA West conquest by winning all three classes and walking away with the titles.

Irnie has enjoyed tremendous support from title-sponsor mymobibuff.com this season and has capitalized on this opportunity with an outstanding string of performances.

It’s nice to see a hard-working privateer get a break and we look forward to seeing what Marcel can accomplish through the rest of 2014.