Air-cooled V-twin engines as used in Harley-Davidson motorcycles are prone to very hot operating temperatures. Things can get especially toasty during periods of extended idling or when caught in slow moving traffic. With this tendency in mind, AMSOIL decided to make a point regarding their AMSOIL 20W-50 Synthetic Motorcycle Oil.

Related: See All Of Our Harley-Davidson Articles

AMSOIL installed their Synthetic 20W-50 in a 2012 Harley-Davidson FXDB Dyna Street Bob and placed it on a dynomometer. Then they ran it at varying engine speeds from idle to slow speed and then rolled on the throttle to replicate city driving conditions. The electronic high-temperature safety sensors were disconnected to keep the engine from shutting down as the engine temps reached critical levels. With the dead air of a dyno room, the only two things that would contribute to cooling the engine were the cylinder fins and the engine oil. The test went on for almost 70 minutes with cylinder temperatures topping out at over 500°F! This is way beyond normal operating temperatures.

Anyone who has ever idled a Harley on a hot day while waiting for a long train to pass, can attest to how this demo would be a considerable test of engine and oil.

Infrared image of the Harley Twin Cam 96 engine during dynomometer heat testing with the heat scale shown on the right. Note the back cylinder reaching 530.4F!

Upon completion of the dyno-run, the engine oil was drained and whisked off to the lab for analysis. The results were quite astonishing. These engine temperatures should have seized the engine solid and completely destroyed the oil. But the oil properties were scarcely different from brand new oil. The viscosity did not change at all. Only mild oxidation occurred. The “TBN” or total base number was hardly affected. TBN shows the the oil’s capacity to combat acidity. Lastly, the engine did not experience any accelerated wear during this extraordinary trial. Wear-metal findings were negligible. To sum up, this batch of AMSOIL 20W-50 Synthetic Motorcycle Oil was barely broken in. It would be more than suitable for continued use for a full season. 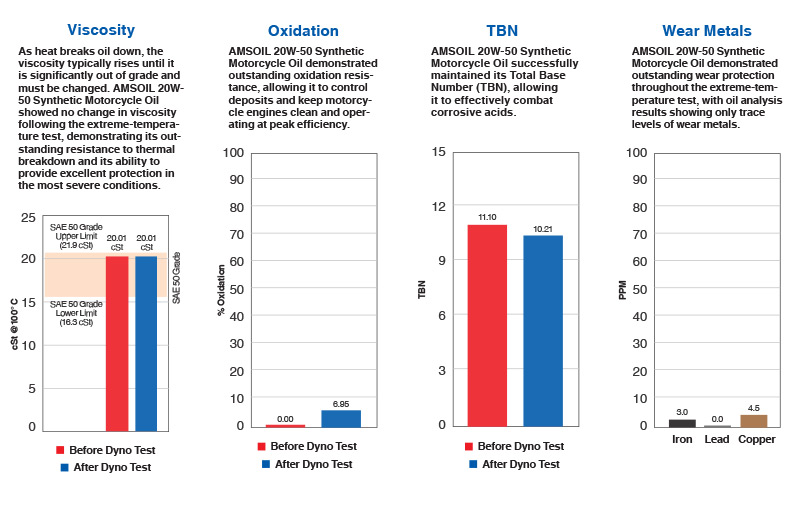 Conclusion- Is Conventional Oil Good Enough for your Harley?

One can conclude that you can take your Harley to hell and back with AMSOIL 20W-50 Synthetic Motorcycle Oil. It will protect your engine and come back for more. Do you still believe that synthetics are not worth the few extra bucks in Harley-Davidson motorcycles? This test and the real-world performance upgrade that our customers rave about would suggest otherwise.