Only a limited number of oils are proven effective in these applications. 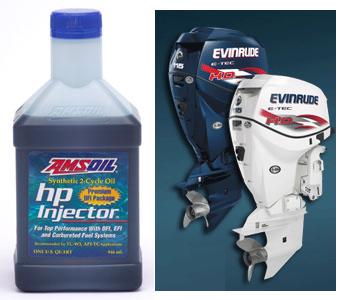 With the beginning of each new year, many people think about what they can do to improve some aspect of their lives. AMSOIL is no different, except that it’s an ongoing process. We are always looking for ways to improve our products, and one of the ways we validate products is through field studies. The AMSOIL technical team recently completed a field validation study outlining the performance of AMSOIL HP Marine Synthetic 2-Cycle Oil (HPM) in Evinrude® E-TEC engines. These engines are unique in that they offer an alternative, lean-mix setting that allows the engine to use less oil. Whether programmed to run at the standard mix ratio or reprogrammed to the lean-mix setting, E-TEC engines use sophisticated electronic equipment to monitor conditions like RPM and throttle position to determine the gas-to-oil ratio injected into the engine – similar to how electronic oil life monitoring systems determine when a car’s oil should be changed. In order to take advantage of the lean-mix setting, a customer must have his or her engine reprogrammed by an Evinrude dealer. The customer must also agree to use Evinrude Johnson XD100 two-cycle oil exclusively.

Of course, we know that HP Marine is up to the task, and to prove it, AMSOIL conducted a study at a SEA-TOW facility featuring twin Evinrude 250 hp E-TEC engines, one lubricated with hp Injector and the other with Evinrude Johnson XD100. SEA-TOW is a marine-rescue organization specializing in non-emergency calls for assistance, typically towing large vessels like sport cruisers and yachts. This is an ideal environment for testing HP Marine in reprogrammed E-TEC engines under heavily loaded conditions.

As part of the study, both engines were run for 28 hours on the standard oil injection setting and were then reprogrammed by an Evinrude dealer to operate at the reduced oil consumption setting for the duration of the study. The starboard engine’s oil reservoir was filled with AMSOIL HP Marine and the port side engine’s oil reservoir was filled with XD100 two-cycle oil.

The validation period lasted a total of 534 hours; approximately 240 hours were spent under heavy-duty service conditions when the SEA-TOW boat towed marine vessels. The engines were closely monitored for the duration, and upon completion, both were disassembled and rated by a certified independent rater from Intertek. Intertek of San Antonio, Texas is an independent company specializing in product and performance testing, including qualification testing of lubricants. Intertek evaluated both Evinrude engines based on NMMA TC-W3 criteria for two-cycle marine engines, examining the condition of all engine parts and inspecting for wear and deposit formation.

Wear protection in critical areas, including the cylinder walls, was one of the main areas of interest. Although we expected hp Injector to perform well, the results exceeded our expectations.

As seen in the photo below, the cylinders looked almost new and the cross-hatch pattern from machining is clearly evident. Blockage of the exhaust ports is rated on a 10-point merit scale; a rating of 10 indicates the port is 100 percent free of blockage. Scuffing of the cylinder walls is measured by percent, where 0 percent indicates no scuffing.

This photo shows one of the cylinders from the hp Injector lubricated engine. Note that the original cross-hatch pattern is still visible. The scratch marks above the exhaust port are the result of a mechanical phenomenon; they appear in the exact same spot on the XD100-lubricated cylinders.

Both hp Injector and XD100 received high ratings. The exhaust ports of both the AMSOIL- and Evinrude-lubricated cylinders had few deposits. Both oils scored near a perfect 10. Neither set of cylinder liners showed scuffing of the cylinder walls. Both engines received a 0 percent wear rating in the cylinder wall area, indicating the oils provided statistically equivalent overall wear protection.

AMSOIL HP Marine and XD100 earned near identical merit ratings for hard carbon deposits, scuffing and/or staining in all critical engine areas, including pistons, connecting rods, cylinder head, crankshaft and main bearings. The physical condition of these parts demonstrates that equipment integrity in both engines was maintained at near identical rates, despite the reduced oil rate and severe service conditions. The evidence clearly supports the use of AMSOIL HP Marine in E-TEC engines programmed for reduced oil consumption.

Based on these findings, AMSOIL HP Marine will provide excellent protection for Evinrude E-TEC engines programmed for reduced oil consumption, and AMSOIL fully supports the use of AMSOIL HP Marine in place of Evinrude XD100 in these applications.