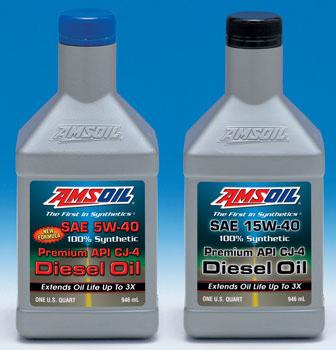 With the help of Duluth, Minn.-based refuse hauling company Nordic Waste, AMSOIL put its Premium API CJ-4 Synthetic 5W-40 Diesel Oil (DEO) and four competing API CJ-4 diesel oils to the test. The objective was to prove the AMSOIL product’s superior performance in Total Base Number (TBN) retention and shear stability, two characteristics that correlate to extended service life and enhanced wear protection. Results show that AMSOIL Synthetic 5W-40 demonstrated excellent TBN retention and was the only oil to remain within its specified viscosity range throughout the test interval.

The five oils were consecutively tested in the same 2006 International 7400 rear-loading refuse hauler practicing drain intervals of 300-plus hours. Oil samples for testing were drawn every 50-75 hours. The vehicle was subjected to hauling up to 22,000 pounds of refuse up and down the steep hills of Duluth 12 hours per day. It encountered frequent stops and red-lined starts and maintained extended red-line operation during the process of unloading.

As chart 1 shows (below), AMSOIL Synthetic 5W-40 was a top-performing oil in the area of TBN retention. It is important that the slope of the TBN trend line be gradual and span the entire life of the oil. While some oils experienced sharp declines, indicating poor performance, AMSOIL Synthetic 5W-40 maintained high TBN levels throughout the drain interval to provide effective engine protection.

AMSOIL Synthetic 5W-40 Diesel Oil outperformed the competing oils in the area of shear stability (chart 2, below). Even after 371 hours in service, it was the only oil to remain within the intended viscosity range, measuring 12.5 centistokes (cSt). In contrast, all four of the competing oils sheared out of grade before 168 hours of operation, with the Chevron and Valvoline products shearing out of grade prior to 100 hours. AMSOIL Synthetic 5W-40’s increased shear stability allows for superior wear protection and long-lasting engines.

As the test results show, today’s stricter emissions regulations and advanced engine technologies make engineering a diesel oil that balances TBN retention with shear stability a serious challenge. For example, while Valvoline Premium Blue Extreme demonstrated TBN retention on par with AMSOIL, its viscosity after 93 hours was lower than the viscosity of AMSOIL Synthetic 5W-40 after 371 hours. Similarly, Shell Rotella T6 maintained viscosity well but was the poorest-performing oil in the area of TBN retention.