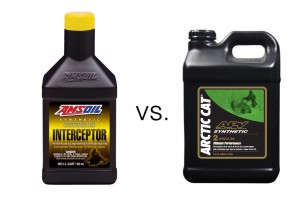 For the 2016 snowmobile season, Arctic Cat offers three distinct 2-stroke oils at their dealerships. Let’s explore the Canadian and US pricing for each product and also discuss the engine types and riding styles for which each is intended. Then we’ll analyze the pricing of each Arctic Cat 2-Stroke Oil versus AMSOIL.

We are prohibited from publishing AMSOIL’s wholesale prices. The AMSOIL price comparisons used below are computed using our wholesale program prices when purchasing a case of four gallons and include average shipping costs. Remote destinations may have extra freight charges attached. You certainly can request an AMSOIL wholesale price list using the contact form on this page.

The prices listed below for Arctic Cat 2-stroke oil products are based on averages from randomly selected Canadian and US Arctic Cat dealers. Prices may vary at other locations.

APV Synthetic Oil is Arctic Cat’s all-round 2-stroke oil that is suitable for every model except for those equipped with the C-TEC2 600cc engine (more on that below). As the name implies, CAT APV Oil is designed to be compatible with Cat’s variable exhaust power valve system called APV (Arctic Power Valves). This system has been used for years on various Suzuki-made 2-stroke Arctic Cat engines. Their current “8000” series 800cc engine would be a prime candidate. APV Synthetic Oil is designed to resist clogging these power valves while offering acceptable performance and protection.

On average, Arctic Cat APV Synthetic 2-Stroke Oil is 37% more expensive than AMSOIL Interceptor shipped right to your door. This applies to prices from either Canadian or US Arctic Cat dealers.

Cat C-TEC2 oil is commonly stocked in 48 fluid ounce (1420 ml) pouches. The Arctic Cat C-TEC2 Synthetic Oil was designed specifically for Cat’s C-TEC2 600cc 2-stroke engine. The C-TEC2 engine is a new generation 2-stroke that employs direct injection and precise electronically-metered fuel and oil delivery. The result is an engine that utilizes every drop of fuel and much less oil than traditional 2-stroke engines, while producing exceptional horsepower relative to its displacement. The huge challenge for Arctic Cat engineers was preventing premature wear when so little 2-stroke oil is consumed. Arctic Cat decided to offer an upscale 2-stroke oil that could withstand the relatively “dry” operating conditions of the C-TEC2.

The retail price of Arctic Cat C-TEC2 Synthetic Oil at your Cat dealer is anywhere from 58% to 68% more expensive than AMSOIL Interceptor. Having a case of Interceptor shipped to your door using our wholesale programs can save you a lot of money with all of the benefits of a premium synthetic 2-stroke engine oil.

In a perfect world, wouldn’t it be great to have a full-synthetic substitute for Arctic Cat Formula 50 Mineral 2-Stroke Oil that sells for a lower price? We can do that! Despite being much less expensive than Cat’s other 2-stroke oils, in our opinion, Formula 50 is way overpriced and not a great value for your dollar. We suggest using AMSOIL “AIO” Synthetic 2-Stroke Injector Oil instead. It offers all of the benefits you would expect of a full-synthetic 2-cycle oil including low-smoke, reduced engine deposits, exceptional cold weather performance and reduced friction. AIO can even be used in engines with variable exhaust power valves.

The retail price of the conventional Arctic Cat Formula 50 Mineral 2-Stroke Oil Synthetic Oil is between 26% and 29% more expensive than our wholesale price for AMSOIL “AIO” Synthetic 2-Stroke Injector Oil (when purchased by the case). This includes shipping costs right to your door. AMSOIL AIO Synthetic Injector Oil is a better deal all day long. In fact, Formula 50 is priced very closely to the ultra-premium AMSOIL Interceptor.

Oildepot can put a full-synthetic 2-stroke oil in your Arctic Cat engine that will improve every operational aspect at a better price than the oil found at your Arctic Cat dealer. Call us at 1-800-748-5781.