AMSOIL is making some changes to their collection of European Formula Synthetic Motor Oils. Some have been reformulated and improved to meet vital new industry specifications. All four products will receive subtle name changes and most get new container size options. 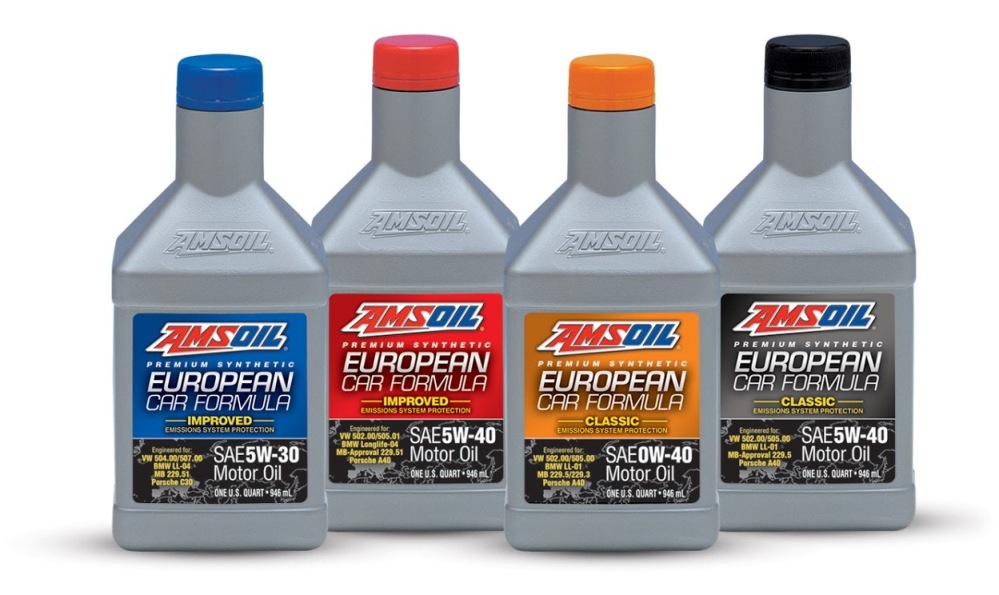 The Low and Mid-SAPS products will be called “Improved” ESP, while the Full-SAPS products will be called “Classic” ESP. “SAPS” refers to the oil’s “Sulfated Ash, Phosphorus and Sulfur” content. “ESP” stands for “Emissions System Protection”. The emissions system of each European car model is designed to tolerate a specific SAPS level and that is why there is a variety of European motor oil types.

Let’s take a look at how AMSOIL’s Euro Motor Oils will look for 2016.

This product receives the most changes of all of the European engine oils. First off, its name will now be “AMSOIL European Formula 5W-30 Improved ESP Synthetic Motor Oil” with the product code remaining “AEL”. As we mentioned a couple of days ago, AEL has been reformulated so that it now meets the Chrysler “MS-11106” and ACEA “C-3” specifications. This makes European Formula 5W-30 suitable for Dodge Ram 1500 pickups with the EcoDiesel engine. This engine is an Italian-made 3.0L turbo-diesel unit made by VM Motori. This engine is also found in some Jeep Grand Cherokee models.

Important: For the time being, this new formula is available only in the new US gallon (3.78L) jug format (singles or cases of 4). Quart bottles will contain the old formulation until current stock runs out which will be sometime in January, 2016.

The 5 litre jug format is being phased out and will be replaced with the aforementioned US gallon jug container option.

The Full-SAPS Euro 5W-40 is getting its name changed to “European Formula 5W-40 Classic ESP Synthetic Motor Oil“, with the product code remaining as “EFM”. Although the formulation is unchanged for European Formula 5W-40 Classic ESP, some its specifications are newly OEM-licensed. EFM 5W-40 is now carries the Mercedes 229.5 factory approval and the official Porsche A40 endorsement.

This product will also now come in US gallon jugs (or cases of 4). The 5 litre jug will be discontinued once current stock is sold off.

The AFL Mid-SAPS Euro 5W-40 will now be called “AMSOIL European Formula 5W-40 Improved ESP Synthetic Motor Oil“. Other than a new name and label, there are no significant changes to this product beyond discontinuation of the 5 litre jug format. This will be replaced with single US gallon jugs (or cases of four).