A question from a reader: “I’ve got a 2012 Dodge Charger SRT8 with the 6.4L Hemi engine. Dodge recommends 0W-40 motor oil with the Chrysler MS-10725 specification. I see that AMSOIL does not offer a 0W-40 motor oil for automotive use. Do you have anything that is suitable for my car?”

What about the fact that the AMSOIL product is a 5W-40 and Dodge suggests a 0W-40 motor oil? We took that question to AMSOIL Technical Services. They advise us that this full synthetic 5W-40 is perfectly fine unless the car is being started at temperatures below -40°C (-40°F). 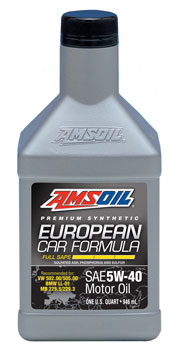 The term “SAPS”  refers to the amount of Sulfated Ash, Phosphorus and Sulfur (anti-wear and detergent additives) in the engine oil. European engine oils are commonly classified by their SAPS levels: “Low”, “Mid” or “Full”. This 100% synthetic 5W-40 is the ideal candidate to contend with the heat and mega-horsepower delivered by your Hemi V-8.

We can offer this synthetic engine oil at wholesale prices. Request a price list using the form on your right. We ship from two warehouses in Canada and eleven located throughout the US.

Regarding Honda Moly 60 Paste for Shaft Drive Motorcycles No AMSOIL Motor Oil For The 2014 Ram EcoDiesel Yet!
Scroll to top