As any Harley-Davidson motorcycle rider can tell you, their V-twin engines can generate a lot of heat. This is especially true during slow, stop-and-go conditions. AMSOIL 20W-50 Synthetic Motorcycle Oil is designed to combat this heat and riders generally see lower operating temperatures and reduced oil consumption. But to really prove that their 20W-50 offers the ultimate in hot weather protection, they performed a test under conditions that were much hotter than could ever be experienced on the road.

In our new article AMSOIL Synthetic 20W-50 Endures Harley-Davidson Torture Test, we document how AMSOIL put a 2012 Harley-Davidson Dyna Street Bob on a dyno with no cooling fans and then ran it at intermittent speeds to replicate stop-and-go riding. They proceeded to torture the engine for close to 70 minutes with cylinder temperatures reaching over 500F. Then the AMSOIL 20W-50 Synthetic Motorcycle Oil was dropped and analyzed in the lab. As you’ll see in the final results, the oil that should have been baked could have went right back in the engine and used as though it were brand new. These vicious, otherworldly conditions barely moved the needle off of “new”. 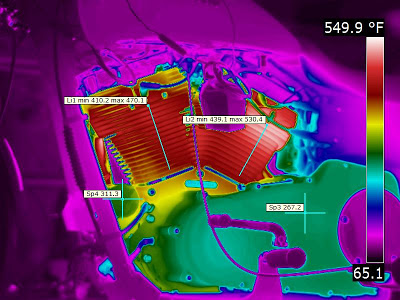 Harley-Davidson 20W-50 & SAE 60 vs. AMSOIL Motorcycle Oil Are Biofuels a Crime Against Humanity?
Scroll to top